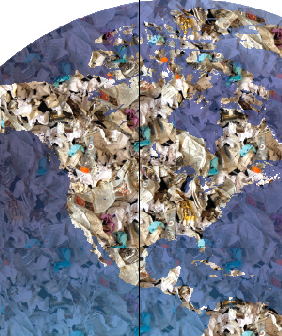 In last month’s 21 Jump Street, two immature police officers return to high school to find the source of a new drug that seems to be all the rage amongst the youngins. They are shocked to find that what now constitutes “cool” is liberalism, multiculturalism and, yes, environmentalism. Indeed, minus the drug dealing, Dave Franco and his diverse crew of popular kids in the film are a prime example of the positive, empowering change that is coming to define our generation. As evidenced by 21 Jump Street, TV shows like Glee, and Blake’s very own Justice League, there’s no denying that acceptance is the new cool. But one minority still remains in the dark: environmentalists.
“Everything seems cliché with environmental stuff,” says Madison Ethen ‘15, somewhat jokingly. But behind this statement lies an unfortunate –and unwarranted– reality. We’ve heard the statistics; we know our waste is severely damaging the planet, and we know that something has to be done. So why aren’t people more concerned?
“In media portrayals of environmentalism, it’s usually seen as a special interest group or some weird little subset of people,” says Rachel Hertzberg ’15, as if the issue doesn’t affect everybody.
This misunderstanding about the essence of environmentalism is one of the heaviest contributors to the problem. While its philosophy dates all the way back to Transcendentalist ideas of the 1800s, environmentalism is defined by Merriam-Webster as “advocacy of the preservation, restoration, or improvement of the natural environment, especially the movement to control pollution.”
The future of our planet is “a completely universal issue,” says Cole Norgaarden ‘13. “Water, food, air… these are all the most basic things that we need to survive—and they’re all the things that are in jeopardy.” Yet for those of us not actively involved in environmental issues, it’s easy to fall into the mentality that someone else will get the work done—only further isolating the movement.
“There’s the perception that adopting a sustainable way of life is adopting a lesser quality of life, that we’re giving things up by trying to protect the environment, which is true,” says Norgaarden. “But I don’t see it as going backwards, I see it as an investment.”
“The truth is that a lot of the damage has already been done and cannot be reversed,” he says. “It’s the time now to make sure that we do what we can to lessen the consequences that are coming… It’s more about accepting that the future is going to be different, but trying to make that future as good as possible.” While this unfortunate reality may dishearten those hoping to create change, can do is to participate in the political process,” emphasizes Norgaarden, who testified at a Minnesota House and Senate meeting against legislation that, if passed, would have lifted a ban that exists on constructing harmful coal fire power plants. “Especially when you’re speaking as a future constituent to your representatives, they take that seriously… it is not something they see every day.”
But no matter your level of commitment to environmentalism, the most important thing is bringing the issue back to the forefront of our minds, and making sure it stays there. Visibility alone can have a huge impact—especially if the entirety of the Blake School is onboard.
While our school differs from others in our eco-friendly habits, such as the waste reduction program and reusable silverware and plates in the lunchroom, “that’s not an excuse for stopping,” says Norgaarden. “It should just be a way to encourage more progress.”
“There’s that quote that says, ‘we don’t inherit the planet from our inheritance, but we borrow it from our children’ or something like that,” he recalls. “We will be directly inheriting the realities of [climate change].”
Remember, kids, green is the new black… and Earth Day shouldn’t be just one day a year.