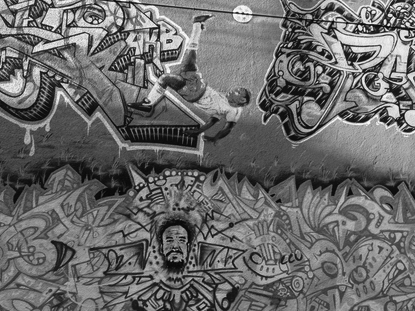 If any person were to walk around the Uptown neighborhood in Minneapolis , they would see walls upon walls of graffiti and murals throughout the streets.  This art would be illegal graffiti however, the non-profit arts center Intermedia Arts permits such art, as do other businesses.  Artwork which is put on public buildings or trains without being permitted is illegal, however much of the graffiti done has been permitted.  The murals and graffiti shown throughout the streets of Minneapolis and Uptown are not made with bad intentions, and are often made to promote a business or store, such as a piece of art placed on the wall of Soccer Planet in order to promote the business. 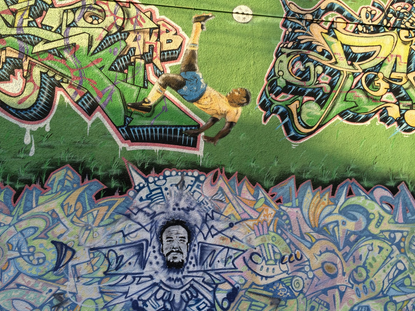 When cities and police forces attempt to contain the artwork by allowing the “free wall” policy, the artwork tends to spread to neighboring areas.  This is looked at as a problem by the police force however, graffiti and murals do not always express vulgar language and dark images.  Often times graffiti and murals represent light, fun images, which would add something to a neighborhood rather than clog it up and make the neighborhood look trashy.

Around the Uptown area, which is where I visited in order to take these pictures, artwork such as graffiti and murals are mostly seen on the walls of buildings in order to spice up the scenery, or promote their business.  This adds to the area, and gives Uptown a light, unique, young and hip feel.  By adding this artwork a better, more unique feel is given to the area of Uptown, rather than making the area look trashy.  This is one of many examples of areas that change their scenery for the better by adding artwork throughout the city. 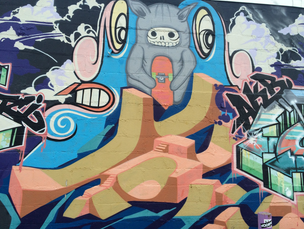 I feel that the addition of light, happy artwork to buildings can really improve the city and give it a more urban, upbeat, younger style.  It gives a city more energy, which is why I feel that Hopkins, Edina, and the rest of the metro area should look into adding artwork such as graffiti to the buildings and surrounding areas in order to improve the overall feel of the areas.  Minneapolis seems to always be alive and I feel much of this has to do with the scenery, which includes lots of murals and graffiti.  Graffiti does not always make these areas look better and it can often dampen moods similar to how it can lighten them.  A dark mural can often take away from a city’s scenery and add a trashy ugly look which is not what I am promoting.  I believe that graffiti can change a city for the better or for the worse but it is a risk that we should all be willing to take.

With the addition of murals and graffiti to Edina, the city I live in, the whole feel of the city could change drastically for the better.  Edina is filled with great neighborhoods, and lots of younger people.   When I look at a city like Edina, which has very little graffiti, and look at a city such as Minneapolis or a place such as Uptown, which is filled with artwork such as graffiti and murals, I feel a more energetic vibe throughout my body, and I feel almost in a lighter, and happier mood.  It gives the areas a more edgy, intriguing feel.  Graffiti and murals improve my daily life and I feel they could do the same to many other inhabitants of Edina and other cities throughout the tri-metro area.