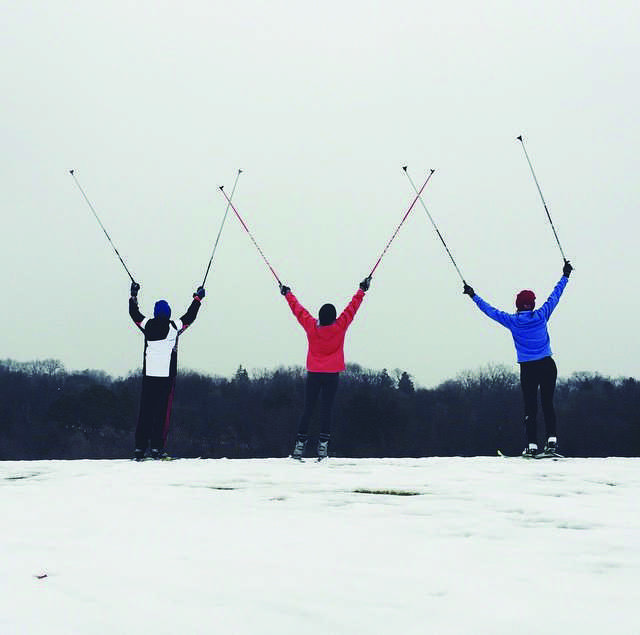 As snow began to fall, nordic skiers anxiously awaited an accumulation of good powder. At the Blake Middle School, practice was comprised of cold dryland and rollerblading. While this got the athletes stronger and more prepared, there was nothing better than getting feet in skis and skis on the snow.

Fast-forward to the end of a strong rebuilding season. Captain Carolyn Nye ‘15 commented that once the season began, “we were almost always able to ski. Theodore Wirth has man-made snow, and the natural snow did help a little bit.”

With a new coach, Charlie Cracraft, and an aggregate of young skiers, Nye felt the pressure to step into a strong leadership role. She comments, “we lost a lot of seniors last year. [The captains] have really worked to pass along what we know.”

Without ideal conditions, the team only was able to compete in three meets before their conference meets began. Captain Eli Makovetsky ‘15 notes that the only way to keep the team motivated was to “bring the energy to a level almost ridiculously high so that [the rest of team] brought their energy level to an appropriate place.”

Even with a lack of seasoned skiers and tough conditions, the team did something that has not ever been done by a Blake Nordic team; Nye and Max Owens ’18 both made it to State. Just to have one skier heading to the State meet was a cause of great excitement for the Blake team, but having two felt almost unfathomable until it happened. Nye mentions that she “trained with Max, who is a really strong skier, and that pushed my skiing ability.”

Between tough weather, intense rebuilding, and two state appearances, the Nordic skiing season was anything but predictable.