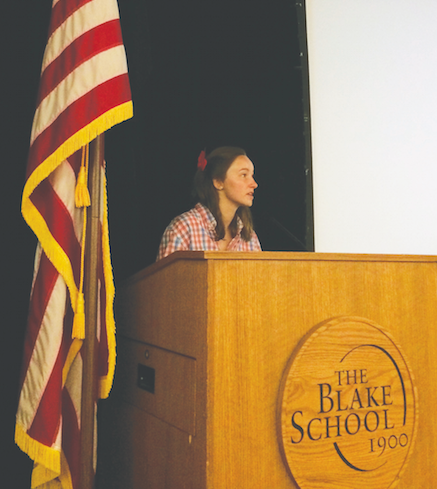 Forum’s online presence is quite similar to its impact on the school: Hard for the average student to find, yet full of hard work and progress under the surface. A quick google search of “Blake School Forum” yields results including the Blake School website, Blake vs. Breck comment threads directed at prospective students and parents, and towards the bottom of the page, a link to the Forum Moodle page. Here, students can find a list of last year’s accomplishments, Forum’s minutes from the last two years of meetings, and can submit ideas for Forum.

These detailed minutes can grant students a eye into the process of Forum and the level of difficulty to get the larger, more noticeable projects achieved in the 40 minutes per week that Forum meets. Additionally, Forum’s projects are held back by internal debate and slow activity. As two-year Forum representative and rising Junior Class President Drew Anderson ‘17 says, “I’d like to see us spend more time working on solving problems rather than just talking about things.”

Forum has gained notoriety within the school for its inaction, rather than its action. Whether it was the promise to “[improve] the student experience and life at Blake through changes made in Forum” made by representative-elect Sam Gelb ‘18 or the idea of “having Chipotle or Jimmy Johns cater once a week or month at lunch” [sic] put forth by candidate Charlie Alldredge ‘16, both included on their nomination form responses, candidates commonly address issues out of Forum’s control or general goals such as “improving the student experience.” While these goals might seem like exciting ideas, they often result in little change because they are out of the control of Forum and implausible.

Between goals of increased athletic participation, tales of previous Forum experience, and calls for two-plied toilet paper, the recent Junior Class elections festered an air of frustration, and, in some cases, downright negativity. So much so that the minutes from the following Friday’s Forum meeting include, “Possibly make a note that speeches should be more respectful” and “Speeches were negative but focused on real issues a number of students are interested in.” Even from the inside, frustration is evident.

Rising Senior Class President Allen Wang ‘16 was elected on his promise to address the general frustration with Forum. In his election speech, he provided the Class of 2016 with insight into the case study of Bearibou, whose failure he attributed to the larger problem of the relationship between Forum and Blake’s administration. He said later, “The administration, actually Dr. Stavney’s reasoning as to why we couldn’t hire someone to oversee and manage the coffee shop was that she didn’t have the spare time to fill out, in essence, a [health insurance policy], which to me just signals a general lack of respect and lack of care to a project which we spent basically half a year on.”

Head of School Dr. Anne Stavney describes a different situation, attributing Bearibou’s lack of success to the fault in willing student workers rather than administrative communication, as well as revealing that Forum, not the administration, decided against paying outside workers or students because, “[i]f you’re going to pay people, then what does that mean in terms of billing, what does that mean in terms of taxes, I mean, it’s complicated, and I think as soon as they got into it they thought, ‘Oh, this isn’t the way we want to go.’” Additionally, Stavney believes “Forum and the administration have a really good relationship,” with Paul Menge sitting in on many meetings, especially before he was appointed Interim Director of the Upper School this year. Stavney was the first ever Head of School to attend a meeting, sitting in on four last year and two this year.

After Forum representatives’ long period of deliberation, work, and planning for the Bearibou coffee shop, to have done it all for naught at the end of the day pressed Wang and other members of Forum into action to improve the relationship between the administration and the student government. Graduating Junior Class President John Mullan ‘16 says, “I think a lot of times, within Forum, we have a lot of really productive meetings, a lot of great work… that gets done by everyone there, and people are really motivated and dedicated and we saw that with Bearibou… It was kind of that lack of communication throughout that process that kind of got us in a jam.”

Multiple members of Forum, including Mullan, voiced their desire for an increased administrative presence within the student government, and it looks as though their wish will be granted with incoming Upper School Director Joe Ruggiero. Says Forum Co-Chair Maddie McConkey ‘16, “I’ve been talking to Mr. Ruggiero… he’s extremely interested in our student government, and I definitely see him sitting in and bringing in both a new level of enthusiasm for working with students and student government, as well as openness and transparency that Forum hasn’t seen before.”

In addition to the administration, this transparency includes encouraging students to sit in on Forum meetings as observers. This year, only one student outside of Forum attended a meeting. McConkey continues, “another goal [of next year’s Forum] is to again get more in touch with the students: reminding people that our meetings are always open, and that we do actually have a webpage, and we do actually have a place where you can submit proposals or things that you’d like us to work on.”