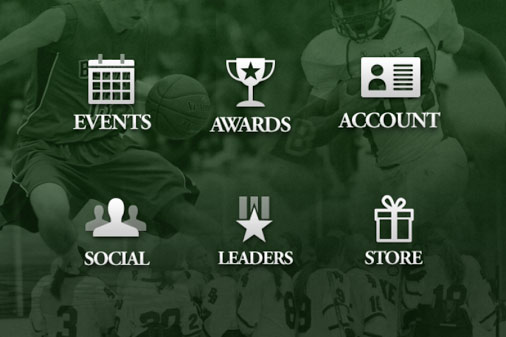 On most Fridays, empty stands pack full with supportive students on their phones. The routine snapping, tweeting, and texting is now accompanied by verifying game attendance on the Defend the Den app.

Defend the Den is a new application created by Lindsay Youngdahl and SuperFanU Inc. to encourage sports game attendance. It works on a points system meant to challenge students to attend as many games as possible. A leaderboard based off of these points creates friendly competition in the hopes of increasing attendance.

Robyn Lipschultz ‘16 is in the top five and loves the app because it “rewards you for showing school spirit.” She has also noticed more people in the stands for girls’ sports games.

Johnny Ferguson ‘16, also at the top of the Leaderboard, agrees that sports game attendance has increased because of the app, but he also wishes that there were a more clarity on what the prizes are.

Youngdahl helped to clarify this, outlining plans to give away small Blake athletic branded apparel and a grand prize of an iPad Mini.

In a survey of 150 students, Spectrum found that almost one third of the population has the app. Those who have it says that it encourages them to be more involved in Blake sporting events. “It gives people even more reasons to go to sporting events, be social, and have friendly competition for prizes,” says Andrew Dietrich ‘18.

While the app helps attendance to a point, other improvements suggested were to include JV games on the app, have less homework on big game days, or allow the athletes participating to check-in before the game starts.

Kelly Brakken ‘17 suggested that “Cheerleaders that really get the word out and make people excited, spread themes, do face paint and other fun stuff” would greatly increase spirit.While the app, and school spirit itself, always have room for improvement, so far the check-ins have created a large attendance increase. Defend the Den by packing the stands!