Why we don't stand for our favorite speeches 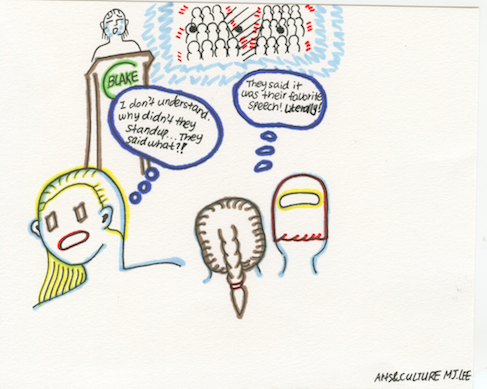 I remember the first day I visited Blake. Shawn Reid guided my parents and me to a mid-sized auditorium named the Juliet Nelson Auditorium. As we entered the door, Reid reminded my parents that every senior gives a speech in front of the student body as a graduation requirement. Although I was only fourteen, my heart started to pound insanely by the word “speech.” Two years later, my heart still pounds whenever I recall that memory. What does it take to allow myself to be vulnerable in front of the entire student body?

On October 29,  Eve Liu ’16 gave her senior speech on beauty standards. Jim Mahoney notes that Liu’s speech “delved into a deeply personal topic with the hopes to enlarge understanding for those struggling with a similar struggle.” Her message was extremely powerful and courageous. Consequently, students spoke highly of Liu’s courage. Nevertheless, the student body remained seated. Serena Swanson ’17 says, “I didn’t understand why people didn’t stand up for Eve’s speech when [students] actually said that it was their favorite speech.”

However, some students thought that Liu was trying to get attention through her speech, although that wasn’t her intention. These mixed feelings on a senior speech have provoked negative thoughts among certain students.

Last year, Blake students faced some serious bashing on senior speeches on Yik Yak, a social media app that allows people to post anonymously. Mahoney says, “It takes courage, focus, and tremendous preparation to stand before an entire school and share your perspective; it takes none of those attributes to launch barbs at a speech or speaker, especially when done anonymously online.” While many students with vastly different opinions may enjoy talking about the speeches online, this incident has made seniors feel more vulnerable to present their speeches.

Although online bashing has decreased since last year, students continue to witness the bashing of speeches, no matter the topic. Emily Johnsrud ’17 said people do it to make them feel better about themselves. However, it is worth asking ourselves if bashing on one’s truth is morally a right thing to do.

Senior speeches can discuss controversial issues that may cause some backlash, but students still admit that these opinions should be valued in our community. Seniors get nervous to present their speech because they too fear judgement. Therefore, standing ovations can help the speaker feel more supported if it’s a tough topic to share.

The psychology of  audiences who remain on their seats often comes from a self-conscious mindset. These emotions are rooted from social forces such as peer pressure, fear of judgement, and other factors. As a part of Blake’s culture, many students feel more comfortable when they’re supporting their “lifer peers” because they’ve known that person for a long time, and it’s hard to stand up for someone who they don’t know on a personal level. However, if we want to make everyone  feel like they are being recognized, we should step out from our comfort zone.

Caroline O’Connell ’16 wishes that people would actually stand up more for the senior speeches. Mahoney hopes that students who feel compelled to stand to recognize a speaker feel comfortable to stand, even if they aren’t joined by the entire room. In the end, teachers and students don’t want their peers to walk off stage feeling like they haven’t touched or reached their audience because there wasn’t response from the audience.