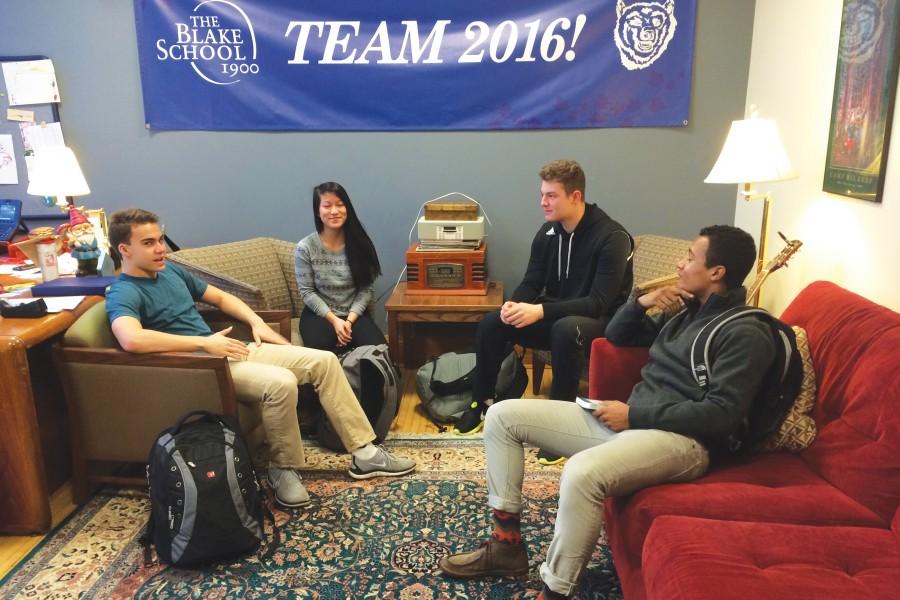 Jim Mahoney’s homeroom gathers in the morning for conversation.

Often viewed as a footnote in the encyclopedia of student life, advisory seems to entertain arbitrary and sometimes aimless topics: surveys, discussions about civil discourse, even just hanging out. Students struggle to explain the purpose of the 30-minute block of time on Wednesdays. “I can’t really think of a specific purpose [advisory] serves,” said Michael Begley ‘18. Jack McGrath ‘17 bluntly echoed the sentiment, saying, “I don’t know the purpose of advisory.” Other students interviewed relayed similar ideas. Students are unsure of advisory’s specific purpose – an issue the administration is addressing by proposing to change both the way the time is used and the positioning of the time itself.

The administration provided clarity on advisory’s purpose. Assistant Upper School Director Paul Menge explained that the “advisory program…tries to put structure around caring and supporting students, in and out of the classroom, over their four years. The purpose of advisory is to ensure that each student has an adult in the community who knows them outside of the classroom and can support them through their time at Blake.”

Upper School Director Joe Ruggiero also highlighted advisory’s ability to get students “to talk about…issues that may not be touched upon specifically in classes.” By providing a community within a community that works almost as a support group, the administration contended, students can confer about topics needing discussion that may not otherwise have a place to be discussed.

To more fully achieve this goal, the administration is planning to amend the use of advisory time. As Menge explained, one of the proposed changes is to make advisory time more specific to grade levels – for example, ninth grade advisories may be more focused on transitioning to the Upper School, whereas 12th grade advisories may be more centered around leaving the school for college. The administration also discussed the addition of civil discourse to advisory.

However, Menge downplayed future change, saying, “civil discourse is not the main theme of advisory. However, anytime we have a discussion, be it in class or advisory, we certainly all want to have the skills to listen actively and consider multiple perspectives as to better understand what each other are saying and feeling-and that is practicing civil discourse.” Although it will still be encouraged school-wide, the reform in advisory will not be centered around civil discourse.

The administration is also hoping to change the structure of advisory. One possible change mentioned was to move homeroom/advisory to after assembly on Tuesdays and Thursdays. Ruggiero said this change would “allow for some processing time for some of the stuff that happens in assembly.”

“Some of the senior speeches have been really powerful, and maybe controversial, and maybe worth discussion,” Menge added. Under the current structure,  “people leave and go to their class and…don’t get a chance to decompress.” Although this proposed change is not necessarily going to happen, a homeroom period after assembly would definitely provide time to talk about impactful speeches.

“I really feel honored and fortunate to be part of a community where faculty and staff really care and are genuinely interested in how students progress in their academic development and how they develop as human beings as well,” said Menge. The fact that faculty are putting this much thought into improving a sometimes-forgotten 30 minutes is evidence of their admirable care for student development. As we saw, with students unable to perceive its purpose, revising advisory would surely be welcomed.