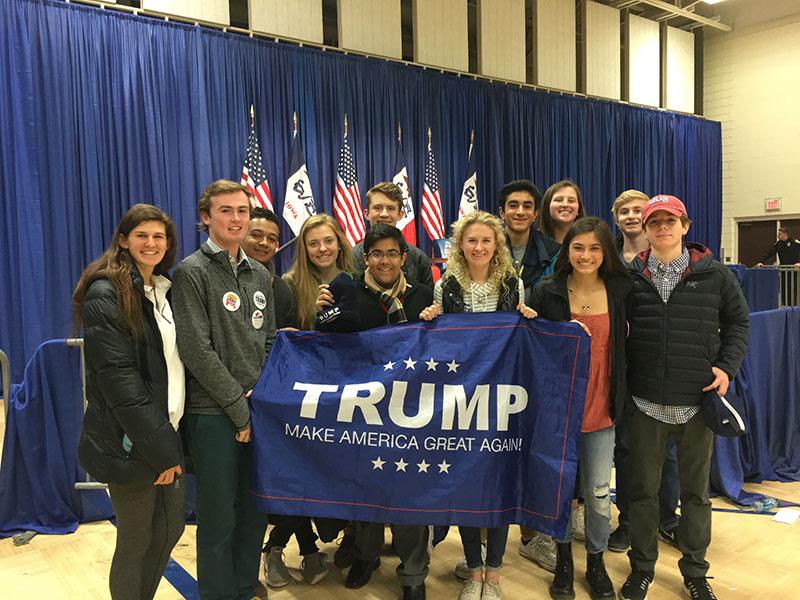 Students at the Iowa caucus pose with a Trump flag at the January 31st rally.

Trump’s road to the nomination is one to keep an eye on.

After a few months of thinking and a trip to the Iowa Caucuses, my take on Donald Trump has altered slightly. During my time in Iowa, I saw Donald Trump speak at a rally in Council Bluffs along with eleven other students. The rally took place the night before the caucuses and was Trump’s last attempt to rally voters.

Students had the opportunity to see Martin O’Malley, Hillary Clinton, Bernie Sanders, Rand Paul, Marco Rubio, Ben Carson, Carly Fiorina and, the GOP front runner, Donald Trump. Trump’s rally was like no other; it lacked formality, screams and jabs at the media were ever present and the crowd worshipped Trump like a god. And yet the audience was not the only rowdy component–he took jabs at the media, yelling something along the lines of, “Yeah, I’m talking to you back there! 90% of you are all liars!” There was a brief moment of disbelief before a tidal wave of of cheers and shouts erupted from the crowd.

Before the rally, people waited up to three hours to claim good spots. During this waiting period I overheard chatter between supporters and numerous interviews, many arguing that Trump could not be “bought,” referring to Trump’s funding of his own campaign rather than being supported by super pacs. His “allegiance-to-no-one” system is often boasted by followers who compare him to candidates influenced by the interests of large corporations.

While waiting on the gym floor we met a veteran who shared the two specific justifications of why he was caucusing for Trump; he said that he liked the idea of America being treated as a business, with domestic tranquility being of utmost importance. His second reason was simply that Trump spoke his mind and authentically represents what the American people think, without censorship.

While Trump embodies the absolute opposite of a middle to lower class working citizen, he still manages to gain the most support from such socio-economic classes, and they were ever-present at the rally. These followers seemingly worshipped Trump as a business-god who was greater than anything they could ever be. While Trump is often argued to be a successful businessman, Yahoo finance, Bloomberg Review, The Washington Post and many other reputable sources explain that he started with his father’s hefty fortune, and could have doubled his current net-worth had he made smarter investments.

So is Trump the business god everybody seems to think he is? Not exactly, but he certainly seems to have appeal. Trump’s road to the nomination is one to keep an eye on.