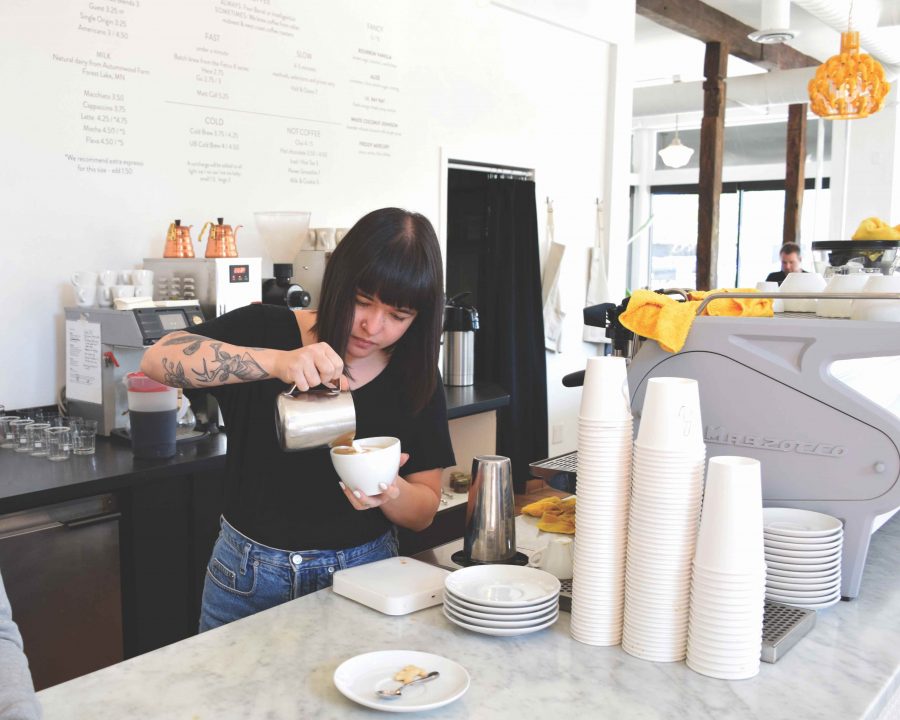 Rachel, a barista at Urban Bean coffee, utilizes her foam technique when pouring a latte.

At 6:30 a.m. in the morning, on the way to Northrop, the wheels of many students’ cars gravitate towards Caribou drive-ins. Whether they’re alarmed by final exams or simply indulging in caffeinated drinks like me, it’s nearly impossible to imagine a day without a cup of coffee.

“When the internet really hit, from 1995 to 2005, people came to cafes to smoke or socialize,” says the founder of Urban Bean Coffee Greg Martin. Nowadays, people come to cafes for variety of reasons. Typically, it’s easier to see people typing, having a meeting, studying, or enjoying some reading.

When asked why cafes bring people together, a barista/ quality control specialist/ staff educator at Spyhouse Coffee Roasting Co. Alex Hanson replied, “people come to cafes to taste good coffee, and latte art is cool to look at.” In addition, Hanson says people come to “be with people.” Cafes such as Spyhouse Roasting Co. are built within different neighborhoods, which adds a “community aspect” to the company. Hanson, who goes around to all Spyhouse retail locations, says Spyhouse is “always in mind” to the neighbors. Recently, Spyhouse partnered with Whittier Alliance to provide a space for bike repair, as well as some complimentary coffee for the bikers.

Martin noted that “people are looking for a creative space” to craft their work. At Urban Bean Coffee, the “large ceilings, white walls, and the simplicity of its layout are conducive for creating” Martin says. Martin thinks cafes aren’t so personal anymore, and Martin agrees that cafes are the places to study, because “working from home is hard. You can easily get distracted by your laundry or your pet.”

On the contrary, Stephanie Ratanas, the coffee buyer for Dogwood Coffee Co., says she’s never been a “coffee shop studying person.” Ratanas adds, “I get very distracted. I was more of a hangout person [in cafes].” Ratanas explained that coffee houses were originally created to form spaces for community. Therefore, even though there are people coming into cafes with laptops, Ratanas thinks people are doing so “to leave their house or office sort of within the community.”

I then gave Martin a metaphorical task to complete: “Coffee is…” he replied, “coffee is freedom.” He believes this because his business has allowed him to explore other things. It’s unlikely to worry about being somewhere on a certain time, so the coffee industry may suit people who prefer to work with more flexibility. Hanson replied, “coffee is infinite” because there’s different ways to “prepare it, consume it, and use it.” Coffee could be a starter of things or even a background, according to Hanson. Coffee is critical in terms of the work Hanson does outside of Spyhouse, whether it’s writing or producing music. Finally, blinking at the camera, Ratanas replied, “coffee is awesome because of the people.”