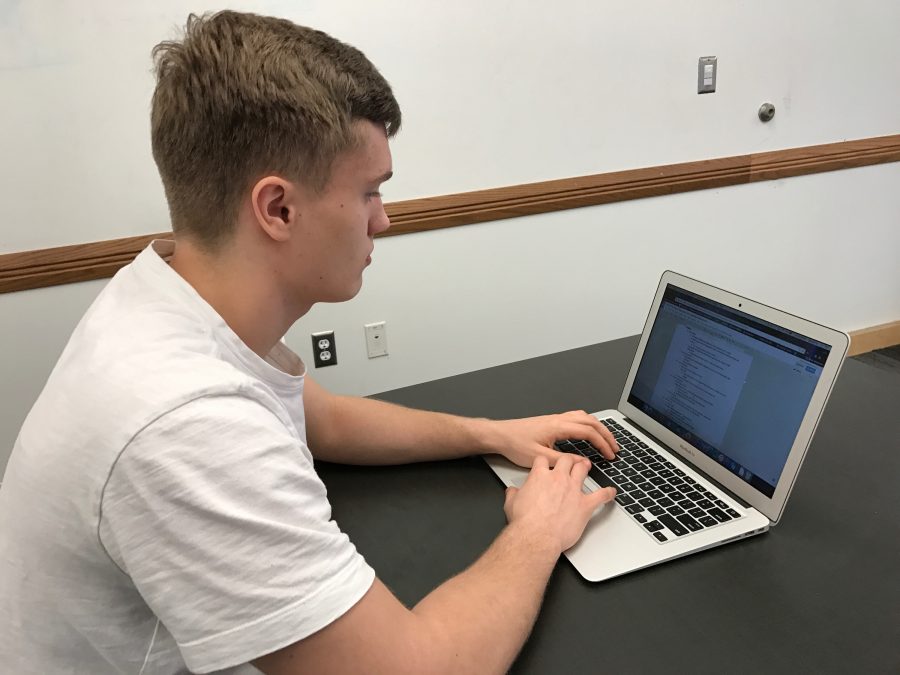 Lucas Foster '18 works on his computer in one of the library study rooms.

Extensions are a prevalent tool for students to push back deadlines for major projects and essays in the Blake community. Extension policies range from two extensions no questions asked per semester to no extensions.

The Social Studies extension policy is very similar to English, however, most Social Studies teachers tend to limit the number of extensions to one per semester. Once extensions are used up, tests must be taken on time and papers will not be accepted after the due date.

The math department, like the Social Studies department, does not practice a universal extension policy. Classes vary from offering no extensions to unlimited extensions as long as there is a good reason (good being decided by the teacher). If not notified in advance, a good reason may still result in minor deductions.

Modern classical languages generally do not accept late work, requiring that all assignments must be handed in on time. Major projects will be deduced 1/3 of a grade per day, not being accepted after the third day.

Much like the Spanish policy, the Honors Chemistry policy expects that students prioritize Science and refuse to give full credit if assignments are late, regardless of the reason.

For the most part, students support extensions. It provides them with an opportunity to produce their best work even if life gets in the way. However, as described above, extensions tend to deviate from class to class.

The English policy also has some positive aspects that could be integrated elsewhere. For example, it’s nice how it gives two days of potential extension. However, it would be more effective if passes from the first semester could carry over to the second semester in order to make it accommodate students who may only be playing sports or participating in other extracurricular activities first or second semester. Also, the English department rightfully punishes older students more than younger students which properly prepares the upperclassmen for colleges which tend to give minimal, if any, extensions.

Although it does not help all students, it is obvious that extensions help a significant portion of the Blake community, and with some modifications they could be even more helpful. Students are recommended to ask their teachers about their extension policy so that other factors of life will not get in the way of students’ academic performance.