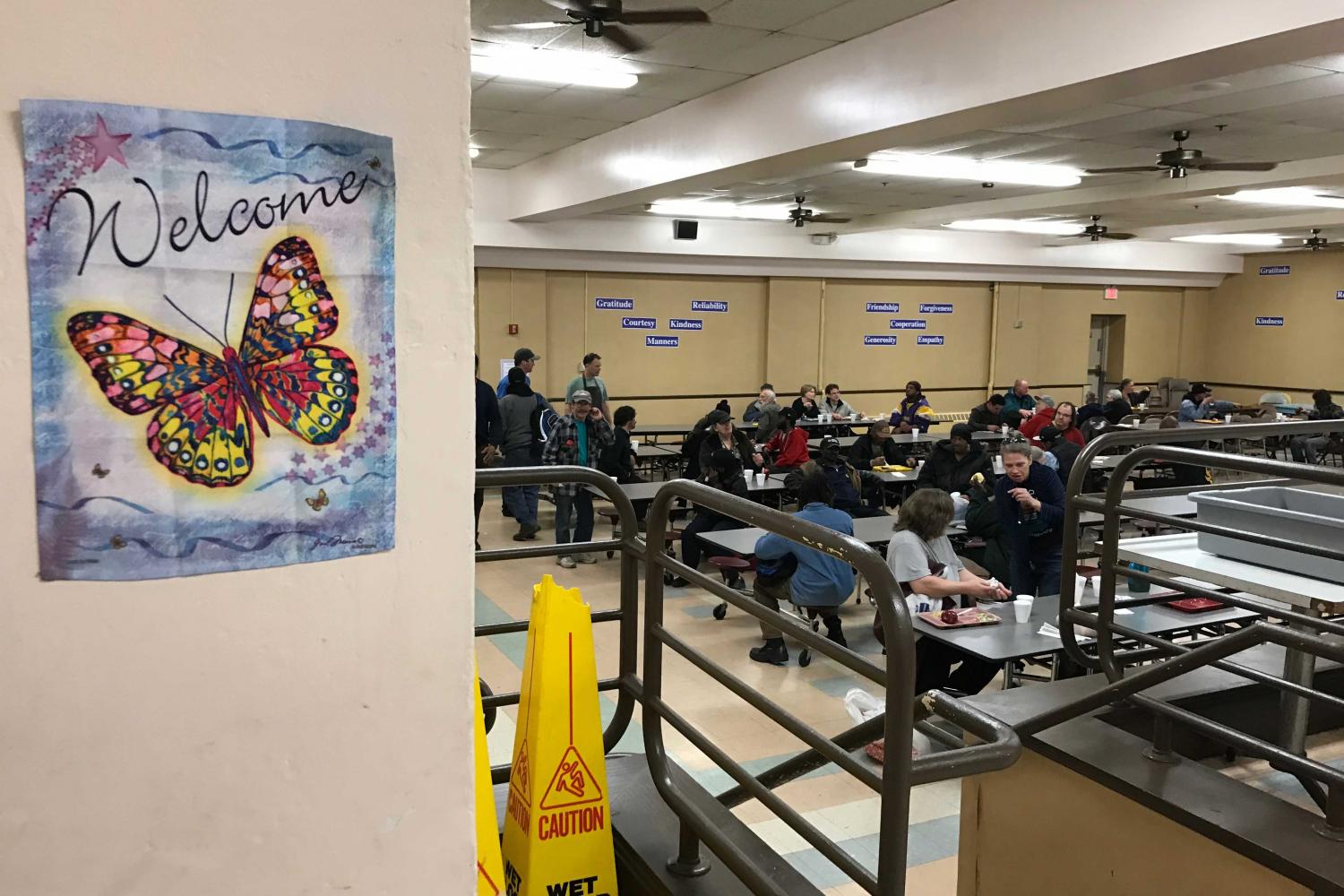 Loaves and Fishes was created in 1981 as a temporary solution to hunger in Minnesota but it is still around today serving anyone who needs a meal around the cities.

Walking into the St. Stephen’s Community Center, a “Welcome” sign hangs on a column directly in front of the cafeteria where the Hennepin Elementary School students have lunch every day. Ironically, though, this message seems to be the opposite of how many low-income Minnesotans feel about their government.

This Loaves and Fishes location, on Clinton Ave South in Minneapolis (just about seven minutes from the upper school campus), is the busiest location. They served 41,000 meals last year, over 10,000 more than the second busiest. Frank Wandzel, the site coordinator at St. Stephens says, “Loaves and Fishes was supposed to be temporary. But we’re still here over three decades later.”

Although a meal kitchen is not necessarily the breeding ground for political conversations, people were generally open to a discourse about their involvement and connection to local and national government.

When asked if he felt he had an impact on local government, one man who did not want to share his name says, “No. I believe that both parties are significantly corrupted by big money… I’m pessimistic.” He voted in the previous presidential election, but feels that his voice ultimately did not matter due to the stable influx of large donations to campaigns.

Campaigns now cost hundreds of millions of dollars. The Washington Post reported that

Donald Trump raised $957 million as of January 2017. For people in low-income situations, these numbers represent a divide between the affluent and the economically disadvantaged.

Another man who chose to not vote says, “I don’t have a good reason [for not voting]. I wasn’t for either candidate. I would’ve voted against one rather than for the other.”

A woman who did vote says, “It was easy to vote.”

The man who did not vote explains, “I’m not making an effort to make my voice recognized.” He says, “I used to go to community meetings. Not really anymore though.”

Profit continues to be the main complaint in government affairs for the first man. He is passionate about health care which he believes “should be a right, not a privilege.” He continues, “profit is too much of a motivator with health care. It’s not a luxury item that people can do without.”

His solution: third party campaigns. “Third party campaigns need to be able to compete with dominant parties. I believe it is un-democratic to have two dominating parties who are motivated by money,” he says. He argues that he would be able to see his beliefs reflected more in third party candidates who side-step the battle between Democrat and Republican representatives.

It is easy to get tripped up in the pomp of national government, but most of the policies that affect people are local government policies.

Cordelia Pierson, Blake parent, who is running for Minneapolis City Council in the third ward wants to change this. She wants to create a “just and sustainable city where all can thrive” which she believes starts with competent local representatives.

A lawyer in the environmental sector herself, she says, “Advocating and raising funds for the environment allowed me to see that for local leadership now to have an environmental and community engagement background is particularly critical.”

She is eager to take steps to create spaces in which people from all backgrounds can come together and share their experiences to promote a more just and understanding local government. “Making sure that we diversify ways that people can engage and share their ideas and perspectives and inform policy makers. . . is so important,” she says.

Pierson believes that voting is crucial in allowing for all people to have their voice heard. “[Voting is] the ultimate expression of our civil rights,” she says.

Voting can be seen as the daunting disconnect between people in low-income environments or minority groups. Jennifer Hall works closely on an initiative called Making Voting a Tradition, created by the Native American Community Development Institute, in order to increase voter engagement within Native American populations.

She says, “It’s important for Native Americans to go out and vote because we have a different relationship with the United States Government than other American citizens.”

She points to the complicated relationship between Native Americans and the U.S. Government, compounded by the use of often unfair treaties and the mass displacement of tribes. “We were here before the American government even existed,” she says.

Native Americans sometimes choose to  not partake in the U.S. Government, then, due to these tensions.

“When we vote, we’re able to. . .  elect people who understand sovereignty and the relationship that tribes have, which is a government to government relationship.” Hall believes voting is one way to allow for sovereignty to be honored nationally and locally.

This is especially pertinent in Minnesota since there are 11 recognized tribal nations within the state border.

Pierson points to two new additions made to the Minnesotan voting system that has already allowed for more participation: early voting and voter outreach in affordable housing.

This year a new program was created where voters could go to a number of polling stations before the actual election day to vote as their schedule allowed. Although absentee voting was a preexisting option, this allowed for many people to see voting as more of a convenience.

Further, the City Council created a new system which makes landlords provide a voter registration form to new lessees of affordable housing. Two thirds of affordable housing in Minnesota is privatised, and Pierson believes this new program will reach far more people who might not know how to vote or that they can vote at all.

These two additions added to a significant increase in the percentage of eligible voters this year with 50.51% voter turnout in 2015 to 74.72% voter turnout in 2016 according to the Minnesota Secretary of State (fairly close to the 2/3 ratio found at Loaves and Fishes).

The problems arisen from the individuals at St. Stephen’s and from Pierson can seem staggering to high school students. Pierson has advice for students, though. She says, “Start by getting to know your neighbors.” Building a community is not about driving somewhere else and leaving, she explains, but rather about “shaping something positive together” which can start in your own backyard.

Hall also has ideas about student engagement saying, “It is important and it might not seem exciting or interesting at first, but get involved. . . If we all participate in voting, [the government] would look a lot different now.”

She continues, “Share what you’re learning at school with your parents. And, don’t be afraid to think critically about it too. Healthy skepticism will only make our democracy stronger.”

Lastly, Pierson mentions voting yourself–or volunteering as an Election Judge at the polls–and if you have “passion for making a difference in addressing some of these disparities. . . share your concern and identify if there is something you can do,” she adds.

Some opportunities for involvement would be to volunteer in creating more green space in Minneapolis through working with Pierson on her project: The Sixth Avenue SE Greenway. Every other week volunteers come out to garden a space planted with native plants last year. Pierson is hoping to begin this year’s gardening during the first weekend in June. More information can be found at http://marcy-holmes.org/about/committees/environment

Volunteer at any of the Loaves and Fishes locations. There are positions in preparing the food, serving food, and cleaning up the cafeteria. Find more information at http://www.loavesandfishesmn.org/volunteer.html.