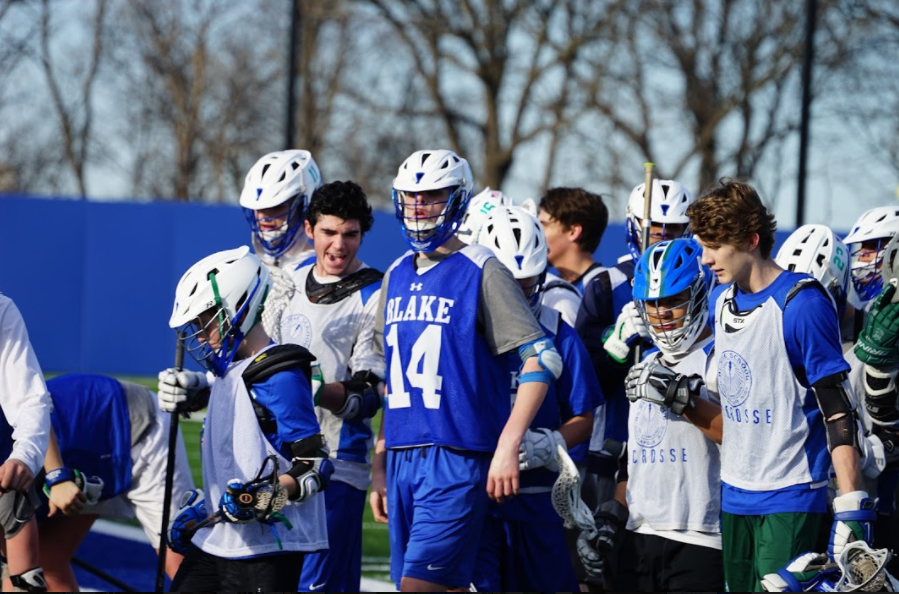 The boys' lacrosse team hooting and hollering after a successful captains practice in 2017.

With spring coming, one of the nation’s rising popular sports is coming back into the fold. Blake Boys Lacrosse enters the season with many high expectations and team goals for this year. Last season the team went 7-6 and lost in the Section 5 final to Benilde-Saint Margaret’s 9-5. The team has lost two of their top four scorers from last season, Jimmy Gruver ‘17 and Thomas Washington ‘18. However hope still runs high for this team. As Levi Hlavac ‘20 says, “The goal is to win the state championship this year and do this the team wants to get revenge and beat BSM. But also we want to have a fun and enjoyable season this year and this implies that we need to win game.”

The team has received a strong freshman class this year and have multiple top freshman talent coming in this season. The team looks to continue the culture of lacrosse to younger bears as they have been starting learning sessions for middle and lower school students. The “Learn to Play Lacrosse” event has been occuring at the Braemar Dome in Edina and they hope to develop more young talent.

Overall the team has had an amazing program over the last ten years with recent recruiting from Division 1 and 3 schools. However, the team has not won state championships since the late 2000s. The team looks to get back to state in the coming year.

The team started their preparations early, playing during the winter in a winter league. They reached the final of this league and beat multiple of the top teams in the state who had taken them down the previous season.

The coaching staff changes this year with the introduction of head coach Justin Young, who played lacrosse at the University of Minnesota and was a USLIA/MDIA All American. Young was the former assistant coach of both the Academy of Holy Angels and Eden Prairie High School. Hlavac explains the importance of this change to the lacrosse program, “I think that this will be a considerable change as our last coach Frank Clark was a well respected and very good coach. But that does not mean that our new coach will not be as good or better than Frank. We will just have to see during the season.”