Students Stress Importance of Studying Early, Getting Rest In Preparation For Finals 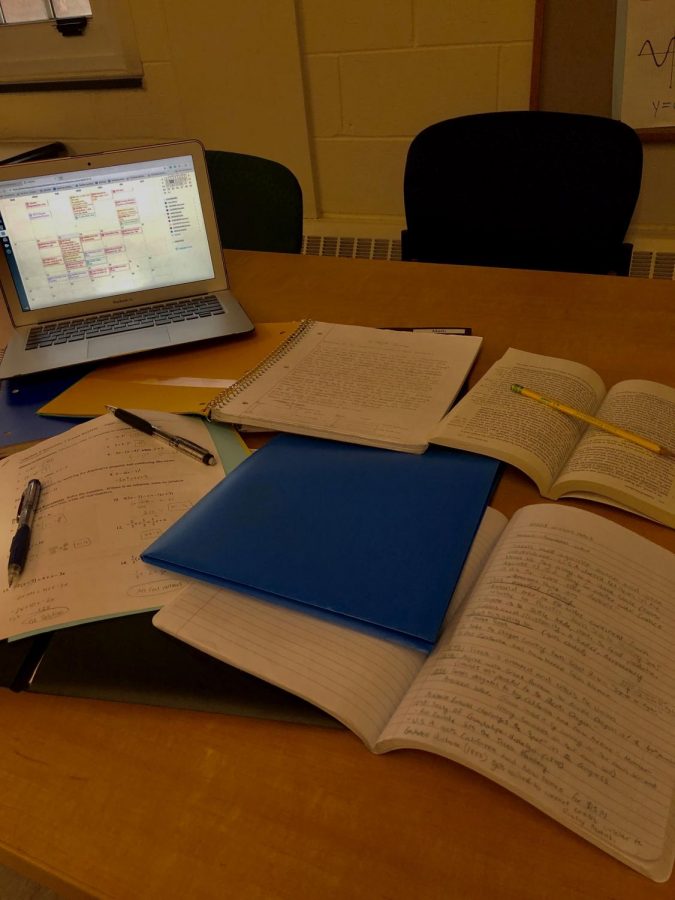 A common scene for students during finals weeks. However, organization can lead to success.

Finals is the time of year that everyone dreads. However, if students take the necessary steps to prepare, they are more likely to get a better score on the test. Furthermore, students who prepare well also will feel more relaxed before and after their test. The most common mistake made by students preparing for finals is that they think that they can study the night before. This strategy goes very poorly, considering the test is based on material from the whole first half of the year. The smart route to take it to start studying now, during penultimate week, the week before finals. This allows for earlier memorization, rather than trying to understand it to the same degree within one day of the test. Nora Fox ‘21 said, “I use a study sheet during penultimate week because it helps me lay out a good schedule for studying.” Using a study sheet,  like Fox, is a great idea because it allows for a calm and thoughtful process each night for about a week and a half leading up to the test date.

The biggest studying period is the weekend before finals week. This weekend is filled with crammed studying for the many students procrastinated studying during penultimate week. The weekend is a great time to review information, but can also be very problematic considering that the brain doesn’t remember information as well when it has to perform the task in such a short period of time. Furthermore, a good tip for studying during the weekend is to only focus on the finals that will occur on Monday and Tuesday. Then, the student can focus on later tests later that week after they complete the first few exams. This is because the finals are spread out over the week and students only have to show up to school during their specific times.

The night before the test is one of the most important times for students to study because it shapes how the student is able to perform the next day. Richie Pihlstrom ‘20 said, “I like to get a lot of sleep the night before my exam because then I feel more relaxed going into it.” One common mistake is that students pull an all-nighter before the exam to study. While this may seem like an “amazing idea,” it can cause exhaustion and thus decrease in performance during the test and the following day. If the student goes to bed rather than study the last bit of a unit, they will perform better on the test since they will be relaxed and more focused.

Similarly to Pihlstrom, Joshua Enebo ‘21 said, “To study before an exam, depending on the class, the night before usually consists of using the study guide as well as readings to review the material.” The night before the test entails reviewing all information one more time. This time should definitely not be used to learn something for the first time. If the person doesn’t know it by then, chances are they won’t know it for the test. This time before the test should be used for a final review and result in a relaxed feeling going into the test. Keeping these tips in mind, the experience of finals will be much more enjoyable and lighthearted.