If Walls Could Talk

Looking into the 103 year old Northrop Campus and its students 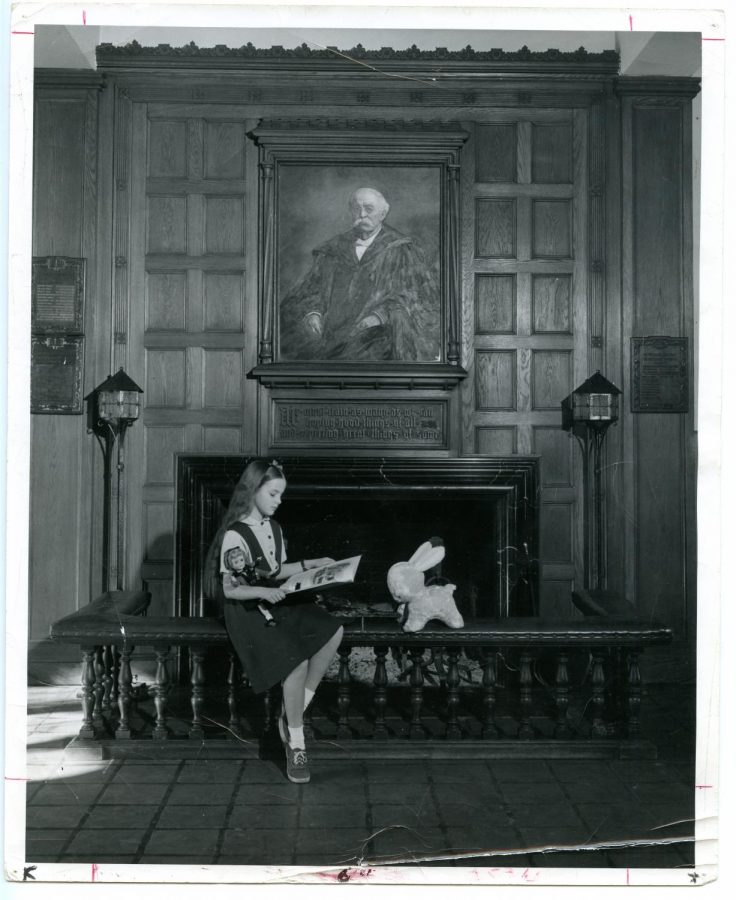 A student studies in front of the main fireplace of Northrop, circa 1951

Studying at the Carlson Commons, going to the English wing for class, meeting up with friends in the “Junior Lounge”. The current spaces of the Northrop campus are so integral to students’ and faculties’ daily routines and experience that itís difficult to remember that the building is over 100 years old and that the hallways, rooms, and culture that seems so familiar used to be entirely different.

The infamous segregated lounges used to be open to everyone. The senior class used to have an entire room to themselves, dubbed the Senior Room. With ping pong tables and no supervision, the Senior Room eventually closed due to a lack of productivity. Director of Global Programming and Social Studies teacher Dion Crushshon ’85 explains, “When the Senior Room went away, the seniors kind of claimed the front lobby and then ripple effect.”Art teacher Bill Colburn ’85 adds that ìIn the 80s, everyone just did what they did…Some kids hung out in the library, sometimes youíd hang out by the fire.”

This open community extended into teaching spaces and between instructors. Colburn recalls that “when you got hired, you got an empty room and that was your room and they gave you a key. So there would be an English teacher— not science they need their labs —but like social studies, English, and language were just mixed in on the second and third floor and I think there was a lot of friendship among teachers that just doesnít happen now because all the Spanish teachers are on one end and all this stuff. There was a little more cross-pollination in classes as well.”

East Coast  in the Midwest

Beyond the shift in culture, major renovations occurred in the 1980s when they realized the school, which sat on an ancient river bed, was sinking. While the soft ground was firmed up, the auditorium and lunchroom were renovated. Prior to the auditorium renovations, which also included it being renamed the Juliet Nelson Auditorium for Juliet Nelson ’85 who died in a car crash her first year of college, the auditorium space was also used as a gym. Colburn recalls that, “It was a great space for dances; all the high school dances were there. We always hand bands, it was a different time, so local bands that were popular would play at our dances.”

Renovations in the 1990s centered mostly around beautification. Crushshon says, “When the former Head of School, John Gulla (sp) came to Blake from East Coast private schools he was struck by how similar we were to some public schools in contrast to where he’s coming from. The building itself had more of a typical public school feel, except smaller.”

Gulla oversaw internal renovations: the lockers were hidden, wood framing was added to doorways, artwork was hung on the walls, and the carpets were changed. Crushshon adds that all the changes led to the school feeling “a little more homey and comfortable.”

As the campus underwent more and more renovations which allowed space for more students, the culture also changed. Crushshon explains that “the fireplaces were real, so there was always a big box of wood next to it. Students had a lot of freedoms, so we would feed the fire, it would be blazing, and we would all just lay there. The building felt smaller and there were fewer students so everyone knew each other in a different way.”

With a school that has stood through arguably the most important century of American history, including both world wars and the civil rights movement, itís not hard to wonder if the modernization of the school —for example, the updated science wing will, or potentially already has  destroyed the Northrop campus’ connection the past.

However, Colburn does share that some of the architecture preserves the Northrop campus’ history and legacy of community. Standing in the arts hallway, looking at the stairs that lead to the math wing and the fireplace at the other end, he says “you come up these stairs from the parking lot and there’s this long hallway that leads you to a hearth. This is a wise architect. There is this central fireplace that you can see from the back door. There’s this thing that brings you together and that’s also where the assembly is, thatís where the school comes together as well.”

While many spaces have changed, and the culture along with it, the architecture of this hallway has remained the same. Colburn says, ìkids have been running down this hallway for 100 years. For the first 75 years or whatever, it was little girls because it was a K-12 girls school. But you donít want to lose that, that sound of students going down the hallway…there’s value in being able to hear those feet going down to that fireplace.”