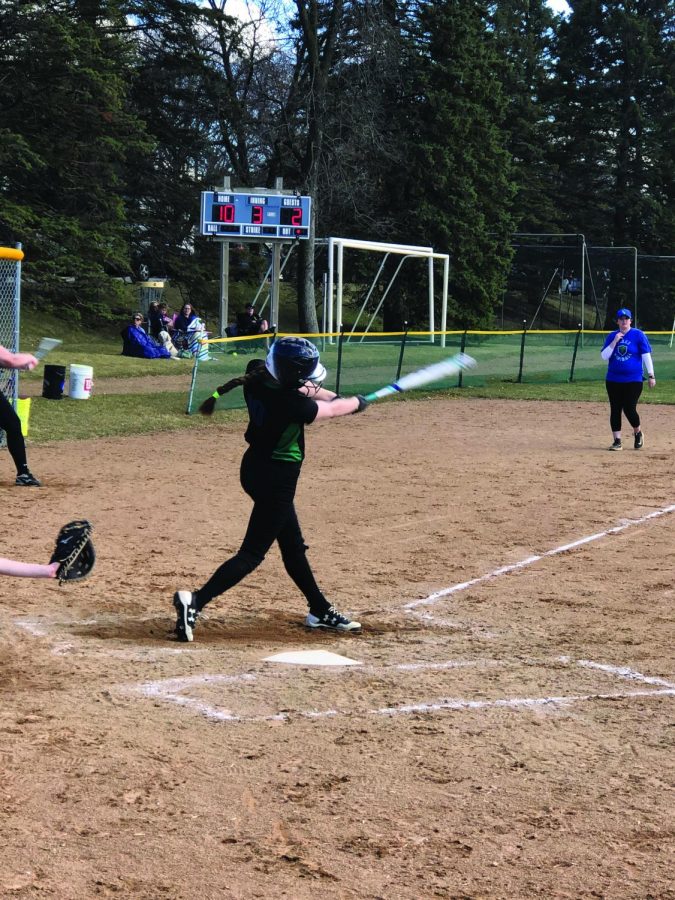 Kenna Vavricheck '21 makes good contact with the ball as she swings.

It was 5:13 pm on Monday, April 8, as Kenna Vavrichek ‘21 stepped up to bat during the bottom of the 3rd inning. It was the inaugural game of the Girls’ softball 2019 season against Legacy Christian Academy, the sunniest day of the year yet. The team was up 10-2, with only one out. Vavrichek hits the ball out into right field, sending captains Sophia Rohlfsen ‘20 and Lucy Kiernat ‘19 to home base, marking up the score and helping the team toward their eventual 15-5 win.

This game came at the beginning of a rebuilding season for the softball team, one where captains Kiernat, Rohlfsen, and Ruth Goldenberg ‘20 are managing many new players and a new coach. Jenna Privette was recently appointed as head coach, replacing Joe Waalk, who moved to a position coaching D3 softball at Minneapolis Central College.

Past seasons have been tough for softball, with the team struggling with issues of confidence. Kiernat explains, last season, coach Waalk, although he had an extensive knowledge of the game, “could never be positive on everything,” and it brought down morale across the board. The turmoil between players and coaches made it hard to keep players invested in the game, resulting in low interest and dwindling numbers.

Last year’s season also coincided with the loss of softball powerhouse Sammy Wagner ‘17, leading to Nikki Stabno ‘20 taking over as pitcher. The team also navigated uneven victories, defeating powerful teams, such as Providence Academy, yet losing to them later in the season. Their record stood at less than 50% victories, with many of these being upsets.

However, the 2019 season brought 30 players, an increase from the usual 12. With many of these athletes being underclassmen and middle schoolers, the team has a bright future.

This increase in athletes caused the formation of a JV team for the first time in 3 years. With only a varsity team, many players were left on the bench and hardly received any playing time. However, the two teams should give all players an equal opportunity to play.

The change in coaching and the influx of new members has caused the team to dedicate the year to “building the community and building the love for the game,” according to Kiernat. Rebuilding confidence will be a key step in moving into a new era of softball, one where the coach-player relationship adds to the experience rather than discourages new players.