Students, faculty question who is truly involved in customs 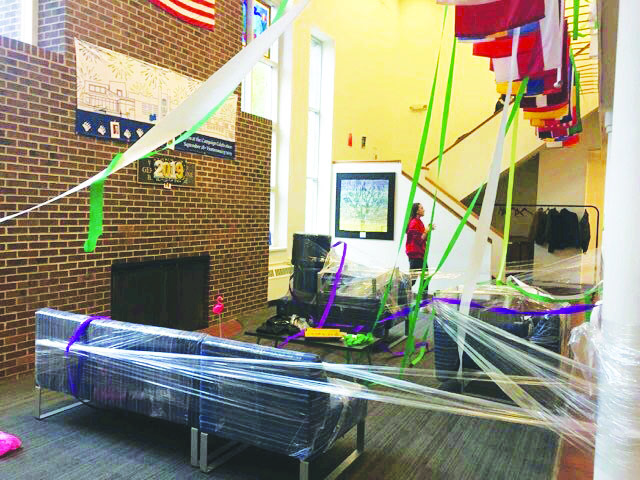 The Junior Lounge after the 2019 Senior Prank, a longstanding tradition often contested by faculty.

“Human beings crave an understanding of where we come from and I think that’s the benefit and power of tradition… [it’s] the way in which we reconnect with the past,” explains English teacher Cory Tao. “There’s this continuity between us here and the way things have been done in our community for time eternal, or so it seems.”powderpuffcmykprankCMYK

Over the course of almost 120 years as both the existing institution and its three predecessors, Blake has developed countless traditions and a variety of diverse relationships to these customs with neither one shared experience nor unanimous beliefs about their worth.

While everyone has their own favorite traditions, their reasoning is often the same. Tao designated the “clapping in” of freshman her favorite because it’s a “positive tradition… with nice continuity.” Similarly, Nathan Blum ‘20 points to the senior-chant as something “to look forward to as a freshman.. and it’s really fun to bring the class together.”

However, current junior grade dean Shawn Reid fought against this tradition in 2018 as the senior grade dean because he believes it’s “too exclusive.” Blum and Reid both value the same thing in traditions, inclusivity, but see it manifested in opposing ways. Tao regards valuable traditions as ones “that continue to serve the mission of the school or how the school sees itself as a community.” She continues, those that become “less equitable or problematic… should either evolve or fade away.”

When faculty or administration decide to alter a tradition for these reasons, students often don’t understand or agree. Blum says, “I think Blake has a really interesting relationship with tradition. They’re really picky and choosy about what they want to keep… and a lot of the time it can seem really hypocritical.” Anna Secor ‘20 echoes this sentiment, saying “Mostly the traditions that I knew freshman year have gone away simply because the administration has said that we shouldn’t do them anymore.”

Secor points to senior traditions as something that has faded due to administration involvement. She says “it really depends on what grade is allowed to do what based on what your grade dean believes, which shouldn’t be the case… they’re only one person who doesn’t necessarily even represent the class.”

Relationships to tradition are further complicated by the fact that not everyone feels included in them. Tao, who has taught at Blake since 2013, says “I feel like I haven’t been here long enough to really understand the appeal of some of the traditions or even have a say in it. For me, the question is always how long do you have to be at a place before the traditions sort of become your own.”

Secor, who came to Blake in ninth grade, explains the awkwardness of mumbling along to the Blake School Alma Mater – a song she’s never been taught – during Legacy Day. She says “there are things like that where you kind of just get left behind.”

Tradition is constantly evolving as students come and go, each bringing their individual connections to the table. As Reid explains, student “tradition” is more so a reflection of the current community than a continuation of long-held customs: “Students don’t know what’s most traditional… what’s interesting is when students really hold on to something because they say it’s tradition without really knowing whether it is.”