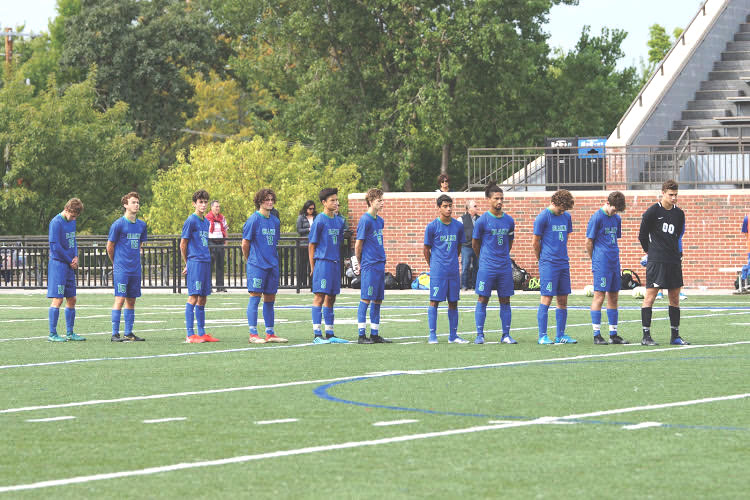 The Bears line up for the national anthem before a home game. The team has scored 58 goals this year already with Benji Pomonis leading the way with 13 goals.

On November 2, 2018, U.S. Bank Stadium witnessed the impossible. Fans, spectators, family members, coaches, and players all looked on as Keegan James ‘21 nailed a 55- yard kick to win the Boys 1A State Championship. The Bears won their first 1A title since 2008, beating unseeded Bemidji.

A year later, the same team shows that they haven’t lost their momentum. After an amazing end to the season, the team (19-1-2), lost 10 Seniors. Many of those players served as role models and mentors for the younger players on the team. In addition, the seniors contributed to the success of the team throughout the course of the season. This year, four of those players are playing soccer in college.

Benji Pomonis ‘21 said, “With the loss of a majority of our starting lineup from last year, we know that we have to work that much harder and everyone on the team has really started to step up to, I guess, rebuild that state championship-winning team.” Even though this year was a tough transition, younger players will be sure to be on top of their game. Pomonis adds, “Coming into this season after winning state last year brings a lot of confidence but, at the same, it brings a lot of pressure.”

Regardless of this pressure, the Bears are determined to be right back where they were last year. With a 9-1- 0 start as of September 15, players are working hard to get better no matter the level of their opponents. Pomonis says, “As long as we keep doing what we are doing and step up when we need to, I am confident that our goal can be achieved.”