A PERSPECTIVE FROM THE EDITORS: Restructuring Policies Paramount to Clarification 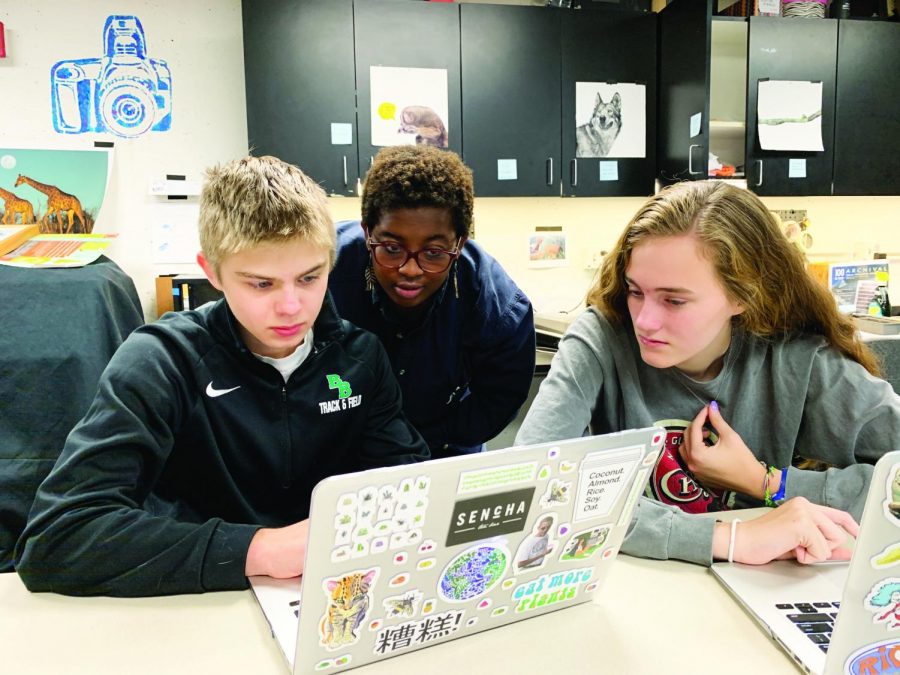 Frederick Leow ‘22, Yeukai Zimbwa ‘20, and Kelly Dayton ‘22 work together in the Photography room on a layout for FLASH.

While there are many different mechanisms for discipline at Blake, perhaps the most well known is the community judiciary board or CJB. The eight-member committee hears cases on a variety of issues, a common one being academic honesty. While the number of cases per year has remained about the same for the last three school years, there remains a lack of communication between CJB members, administrators, and students, leading to unnecessary confusion.

It first must be mentioned that tackling issues in a school, like academic dishonesty, is difficult for a number of reasons. Because every year the student body changes by 25% (more if counting people who transfer schools), it is almost impossible to track data and the efficacy of specific policies. By the time a new policy is implemented, the school could be made up of 250 new people. Similar issues pervade CJB as well: how can student-based ideas gain traction when a significant portion of the board graduates each year?

While these are difficult problems to solve, what is unacceptable is the uncertainty of what could send a student to CJB for academic dishonesty. In the Blake handbook, which is supposed to set up policies that determine what infractions could send someone to CJB, the information provided is vague at best. Academic dishonesty is divided up into two categories: major and minor infractions. Major infractions are defined in the handbook as “premeditated, deliberate or otherwise concerted effort to fabricate, cheat or plagiarize…distribution of answers…extensive and deliberate copying of significant sections or passages of writing from a source without attribution…[or] other examples of significant planning and/or willful deception,î and can carry penalties such as ìdetention…in-school suspension…[or] suspension or expulsion from the school.” The list of major infractions are well-defined and straightforward, but the extreme variance in punishment makes enforcing rules difficult. Obviously cases must be taken on an individual basis, which is why the handbook is set up the way it is, but ambiguity is dangerous when combined with academic dishonesty.

On their own, major infractions are clearly defined. However, the addition of minor infractions makes cases almost impossible to correctly categorize, leading to confusion and unintentional breachings of the rules. I understand why minor infractions were included: to give more flexibility in judging cases. But there is a severe issue with the minor infraction: in all 97 pages of the Blake handbook, there is not a single definition for what constitutes one. This makes it infinitely more difficult to determine the correct disciplinary action for any case because of inherent uncertainties in the classification of any action.

Ambiguity only serves to hurt students. Confusion among what constitutes academic dishonesty will only lead to unintentional transgressions of the rules. In response, I want to propose a revision of the handbook. Either define minor infractions or get rid of them entirely. This is the first step. Next would be to have CJB explain what constitutes an infraction to the school during an assembly. Students may sign a yearly slip saying that they understand the rules and consequences of academic honesty, but in reality, it is meaningless when no one knows them. Educating students is the first step to decreasing the number of academic honesty CJB cases per year.

It is imperative that Blake finds ways to better educate students on what the rules around academic dishonesty are, because as of now, the system fails the students, and students fail in the system.