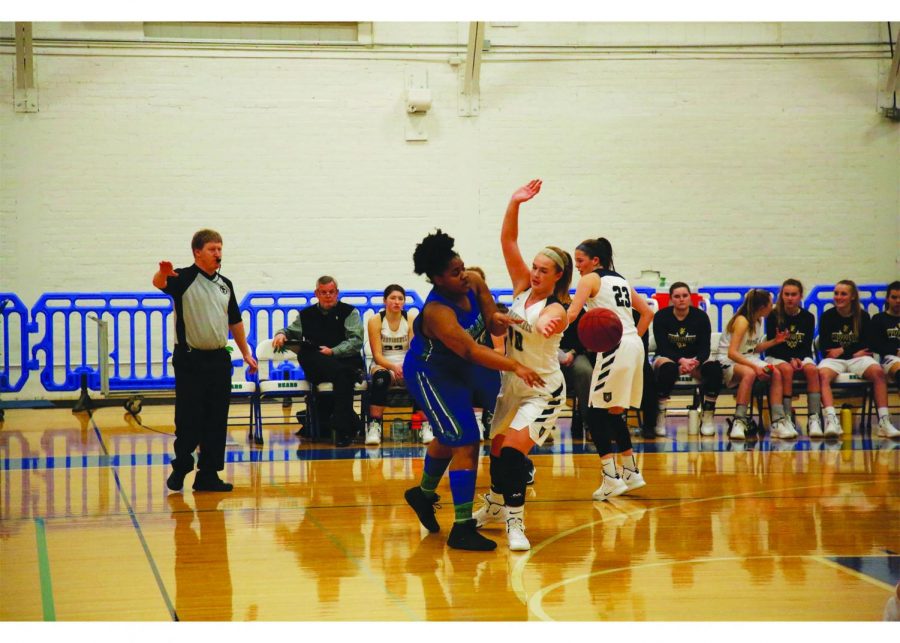 Cheryl Minde '20, the only senior on the team this year, reaches around a defender to pass the ball to her teammate.

With some fresh faces on the team, Blake Girls’ Basketball is optimistic about their upcoming season. The girls hope that their strong team bond and new players will carry them all the way to sections.

With the loss of last years’ seniors Sara Gregor ‘20 and Morgan Phillips ‘20, who were key players on the team, the girls are nervous about this next season. However, after a few practices, they are confident that they will be just as strong or even stronger than last year.

Team Captain, Rachel Winkey ‘21 affirms this by stating, “They [Sara and Morgan] were pretty essential to the team, so it was definitely a loss, but I feel like with our new players, we were able to bounce back.”

One reason the girls’ are feeling confident in their ability to bounce back is because of their tight bond. Winkey explains, “Because our team chemistry is already there, we should be just as good.” Morgan Ramsey ‘21 agrees, “We have a great team bond.”

Because JV and varsity practice together, many on the team find there is more spirit from both teams that make the environment that much more fun. In addition, practicing helps to strengthen the connections within the larger basketball community and aids in creating an encouraging environment for the girls to get to know each other, despite being on different teams.

Ramsey explains, “Since we are such a small program, especially with JV and varsity [practicing together], it all feels like one big team cause there’s only 18 of us, so that makes our team feel like one huge group instead of it feeling so separate.” This combined practice is beneficial when JV players play in varsity games or visa versa, which is common due to the small size of the team. Winkey emphasizes another reason for the team’s tight bond stating, “We’re all fairly close in age and we see each other a lot at school.”

When asked about her goals, Winkey reveals that she hopes to win more than one section game and maintain a winning record. Hopefully, with some new talent and a strong team bond, the team will be able to achieve their goals.