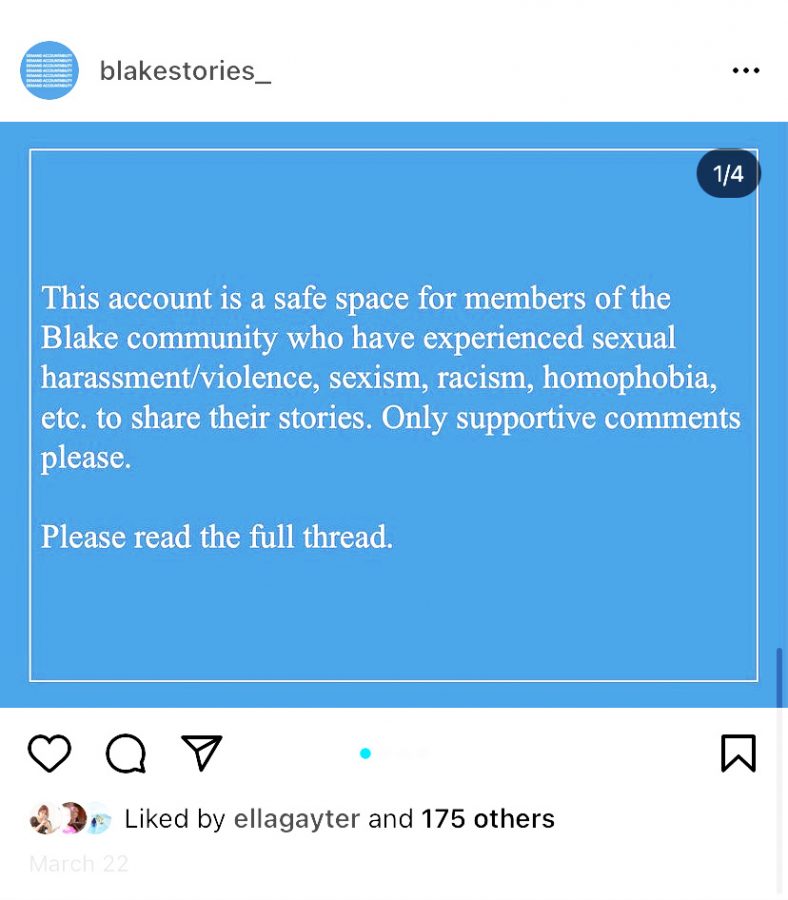 Sharing their first post on Mar. 22, the anonymous Instagram account @blakestories_ was created as a safe space for members of the Blake community to share their stories of sexual harassment and violence, sexism, racism, LGBTQ+ discrimination, bullying, and much more. In their first post, they write, “The goal is to expose the full culture at Blake, rather than to call out specific people. It’s time that we stop pretending that these issues are all ‘out there’ and not here at Blake. Our experiences deserve to be seen and heard, and Blake needs to be held accountable for this culture.”

The anonymous account owner explained that this account has shown that Blake is not immune to hate within the community, between its students, and from its faculty. Additionally, the post explains that the owner of the account remains anonymous, and at first, it was intended that stories would be submitted through an anonymous Google Form. Although well-intentioned, the anonymous submission form quickly became problematic when students began submitting allegedly fake stories to make light of the experiences that were bravely submitted.

On Mar. 25, the account owner posted a statement to Instagram ex- plaining that the Google Form would be closed and submissions would be limited to Instagram direct messages, stating, “This is due to the fact that we’ve received many submissions, some of which we have been informed are not true.” Despite submissions being limited to Direct Message, people’s identities and personal information will stay private.

Continuing to explain the situation, they write, “It is completely unacceptable to be submitting untrue stories that you have not experienced… Using this page as a joke not only points to the need for change around these issues at Blake, but invalidates the experiences of those who have shared their personal stories.”

When asked about the seemingly fake stories submitted, the owner of the account says, “Honestly, it is hard for me to understand. I think people want to take advantage of the fact that it was an anonymous form, and they knew that they could get away with doing and saying whatever they wanted to. I don’t personally understand the mindset behind if someone shares their story and then sending in one just to make fun of it. I think that it was anonymity that enabled some of the people to do that.” They continue to explain that joke sub- missions were not productive to the account and invalidated the experiences of those who were brave enough to share their stories.

When people can hide behind their screens, it creates a sense of invincibility that could add to the motivation to submit fake stories. Despite any reasoning behind the fake submissions, they dismiss people’s experiences and invalidate many survivors.

Many students are hoping for needed change and action from faculty members and administration. Yet, students may find themselves feeling frustrated and discouraged by the seemingly performative emails that have been sent throughout this school year. While receiving messages that affirm Blake’s commitment to inclusion can be helpful, actions speak louder than words. The community has been promised actions on multiple occasions and yet, no long-term solutions have taken place.

The account owner states, “I would hope that there is a response to this because a lot of this stuff is very alarming. People talking about stuff that their peers have done to them or stuff that teachers have done to students, and I think that is most certainly crossing a line that Blake definitely needs to be doing something about that. Either it’s training teachers about boundaries or some sort of clear outline that this kind of [negative and destructive] behavior is not ok. I think that that would be a good step for Blake to take.”

There is no denying that an immense amount of traumatizing and upsetting things have occurred at Blake. Actions ranging from assault to discrimination continue to hap- pen in our community, a school that prides itself on valuing diversity, inclusion, and mutual respect. Although Blake has taken some action steps, like emails and Equity Labs, it is often too late as damage to the student body has already been done.

Rather than waiting to protect students after incidents have already taken place, it would be more beneficial to prevent these traumatizing instances from occurring in the first place. The power is in our hands; we must call on each other and the community as a whole to find long-term, sustainable solutions to these problems and create a truly safe environment for all people to thrive.