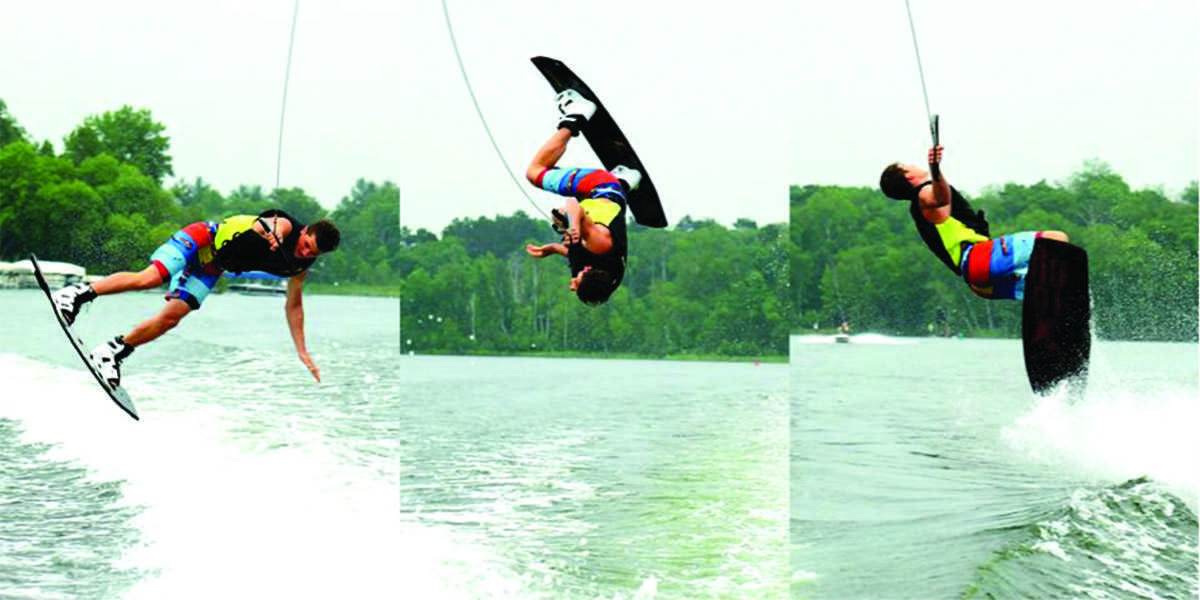 Wakeboarding is one of the many thrilling components of water sports, as demonstrated here by Gavin Siegert ‘16. (photo credit: Gavin Siegert)

Wakeboarding is one of the many thrilling components of water sports, as demonstrated here by Gavin Siegert ‘16.

A beginner’s guide to water sports

People have many names for it—glass, butter, placid—but everyone is seeing the same thing, perfectly flat water—something that us water sports enthusiasts kill for. Flat water allows for perfect cuts on a water ski, the ability to pop off the wake on a wakeboard, and the excitement of flying across the water barefoot. Water sports are an awesome way get outside and have fun during the summer months. Here are the basics.

Water skiing has three tiers. A beginner will start getting up with a ski on each foot. As they progress soon the skier can get up on two and then drop one so they are riding on one ski, which is called slalom. Eventually the skier gets to the point where they can get up on one ski. Will Sweatt ‘16 has been skiing for eight years and slaloming for the past three. He doesn’t categorize himself as an early riser but when it comes to slaloming he doesn’t hesitate to wake up at the crack on dawn to “slice through the buttery water exploding with orange from the rising sun.”

Though perfectly flat water is the favored condition for any kind of watersport, some do not require such pristine conditions. A wakeboard has almost twice the width of a water ski and requires lower speeds, making choppy water much more manageable. Not only this but with a wakeboard, if one does it right, most of the time is spent in the air. The goal of wakeboarding is edge into the wake of a boat and then launch high into the air, before finally throwing down some radical moves. With a speed of about twenty-four mph, falling while riding on water is much more forgiving than in water skiing.

Both of these water sports will bring excitement, intensity, happiness, pain, and enjoyment of just being on the lake. However, there is one final water sport that is much more laid back than the first two. Wakesurfing is the most relaxed water sport out there. With the boat going only ten mph it is almost impossible to have a “bad” fall. Wakesurfing is especially unique due to the riders proximity to the boat. The rider cruzes behind the boat a mere seven feet away. The idea of wakesurfing is to mock the ocean surfing experience of riding a wave. The surfer starts with a rope but as soon as they are up and in the “zone” they can drop the rope and let the wave carry them. Mark Taylor ‘16 has been surfing for five years and loves how “lax” it is. He says that “being so close to the boat you can still jam to music and talk with your buds”.

Whatever water sport one chooses, whether it be water skiing, wakeboarding, wakesurfing, or a combination of them all, it’s hard not to have a great time out on the buttery water. So come on in, the water’s great.