Understanding and uncovering the diversity camera

The smiling faces of students pop from the pages of our school’s royal blue handbook. From a lower school student playing tic-tac-toe to a high schooler graphing functions on a Smart Board, the booklet portrays the school as a diverse, intellectual community, composed of students who love what they do, and who do a lot.

“Blake is the preeminent independent day school in the Upper Midwest with a national reputation for academics,” reads an explanatory statement on the inside cover. It continues, “Blake starts with  small classes of diverse students united by innate curiosity,” the key word for many people being “diverse.”

Over the years, Blake’s promotional materials have been repeatedly scrutinized by students for inaccurately representing our community. Specifically, individuals are concerned about the representation of students of color in the handbook.

Zahir Shaikh ‘16 describes this phenomenon, widely called Blake’s “diversity camera,” as “when Blake wants to do any form of publicity, whether it be in student handbooks, mails to families, or handouts to people who are thinking about applying, they show pictures or representations of Blake that show a diversity of racial backgrounds as to make Blake look more diverse than it actually is.”

As part of enrolling at the school, each family is asked what ethnicity or cultural background they identify with. Of the 1379 students enrolled in pre-K through 12th grade at all three campuses, 975 identify as “Caucasians,” 141 identify as “Asian/Asian American,” 136 as “Multiracial,” 58 as “African/African American,” 18 as “Latino/Hispanic American,” 9 as “Middle Eastern,” 8 as “Native American,” 2 as “Pacific Islanders,” and 32 as “Unsure.” 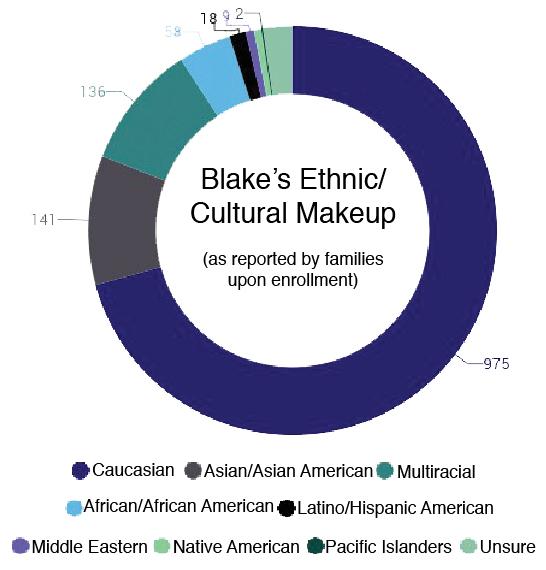 While it may seem that there is an overwhelming proportion of Caucasian families at the school, these numbers must first be put into context. Roughly 29.3% of the Blake community identifies as an ethnicity other than Caucasian, while roughly 27% of the community identifies as people of color. Furthermore, when these numbers stack up with the 55 separate communities Blake students come from, the school is far more diverse: these communities are made up of 22% people of color on average, versus 27% at Blake.

When Spectrum staff examined Blake’s promotional materials, we found that in both Blake’s handbook and its 2014-2015 Annual Report, roughly 50% of the photos featuring either an individual or small group of community members (both students and teachers) contained at least one student of color. Spectrum acknowledges that these statistics are solely based on phenotype, and are not a completely accurate representation of the students’ identities. 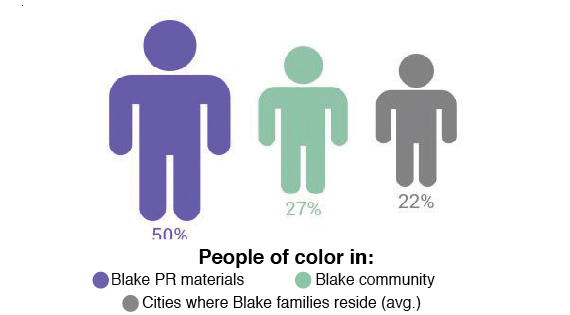 While these numbers are in no way exact, there is a significant statistical disparity between the representation of people of color in the promotional materials (50%) and the true population makeup (27%). Regardless of the precision of these numbers, Shaikh explains, “it’s difficult to quantify things like diversity. To say that we have too much or too little diversity is obviously very hard to nail down because it’s subjective to different people. Some people may think that we have too much diversity, while others may think that we don’t have enough.”

“It is a good thing to champion diversity, because the community seems more accepting and open to people of all backgrounds,” says April Wang ‘16.

However, she continues, Blake’s diversity “is something that a lot of people don’t think about a lot…It’s kind of a joke to people to say ‘oh, Blake is so diverse,’ because it seems like such a blatant contradiction and so ironic that Blake is trying to be something that it’s obviously not.”

Many share Wang’s sentiment that diversity is not at the forefront of community members’ minds. Scott Flemming, director of the Office of Equity and Community Engagement, explains the dilemma: “There’s urgency that ‘I have to crank AP Physics’ or ‘I have to get to AP Spanish’ and I gotta do all these things, so all that [issues of race and identity] can wait.”

The notion that the diversity camera makes true diversity a joke at the school is alarming to many. Flemming explains the purpose of the photos in the handbook: “the idea is to take the best unposed pictures we can find that in two dimensions — across a limited amount of time and space — give a representative view of Blake, [of] Blake at its best.”

Kristen Stouffer, director of Strategic Communications at Blake, and Tracy Grimm, Editorial Manager and photographer, agree with Flemming’s statements. They are two of the numerous faculty who produce Blake’s handbook and other promotional materials, including Cyrus, Blake’s alumni newspaper.

Stouffer explains the purpose of the materials, saying that with “the materials that are directed to prospective students and families, we want people to be able to very readily see themselves here. We want to see them reflected in the materials and not have them have to kind of dig for that. So we have that in mind, and in that sense, the pictures are sort of intentional. We want to be inclusive in our photos, and we’re not going for a certain percentage of representation – it’s not that calculated – but we do want people to be able to see themselves here and seem like a welcoming and an inclusive place.”

Similarly, Grimm explains how the idea of the diversity camera is constantly on the back of her mind. “I want to be sensitive [when I take photos],”  she says, “because I have heard of this diversity camera and I know that it’s an experience that people do have and I want to be sensitive to it. So I can’t say that it’s not on my mind, but it’s not because I’m actively doing that, but because I know it is an experience that people have expressed. As a photographer, I go into a classroom to take pictures of the entire classroom, not just specific people with desired qualities.”

While some may argue that the promotional materials don’t accurately portray the school, Luke Melin ‘19 explains that “I think they do [create an accurate representation of Blake], but they also put a lot of effort forth in trying to show that it’s a diverse community.” This sentiment is supported by Shaikh, who says,  “I think Blake does a good job by attempting to accommodate a diverse amount of people and students from different backgrounds into our community.”

So where does this “diversity camera” idea come from? As Flemming explains, “[The idea] taps into a reality that Blake is roughly 75% white and 25% students of color. There is already an understanding of vigilance of students of color, and there’s a recognition that their experience is not the majority experience. Then the camera comes on and if there’s a picture of four [students] and two are students of color, is that a disproportionate amount of students of color at Blake? In that picture it is. Over the course of an entire page or publication there’s an evening out of that representation, but that doesn’t limit the individual person from perceiving that the reason that they were attractive in that picture is because they were representing a particular group.”

It is this misrepresentation that Blake is trying to move away from, in order to create an environment more supportive to all.