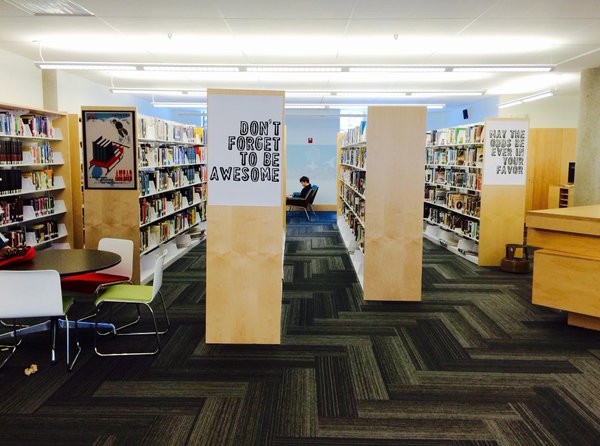 The library staff tells all

Especially for ninth and tenth graders, getting to know the teachers outside of the six or seven classes you meet with four times a week can be difficult. However, many of these teachers who you might not see every day can be of great help to you, in regard to technology and research questions. The faculty members who work in the library have many more responsibilities than simply working in the library; many of them teach classes or run clubs.

Officially the Assistant Director of ISS for Learning Technologies, Dan Trockman works with teachers at every grade level (Pre-K through twelfth grade) to help them with certain projects or if they’re curious about changing something within the schools. Trockman implements those changes, finds the money to fund the project, and manages the budget. Besides his official responsibilities, Trockman has been teaching for 22 years and eleven years at Blake, in subjects such as biology, astronomy, environmental science, and earth science at Minnetonka, Hopkins, Blake, and even New Zealand. Trockman’s direct work with students “keeps [him] sharp and with the ongoing trends.” He enjoys handing out laptops to students at the beginning of the year because it allows him to “see the kids before school starts.” Trockman also works with Pre-K through twelve chairs to work on “philosophies of education as it pertains to technologies.” Trockman comments on his first experience student teaching in New Zealand, where he moved for three months after graduating from the University of Minnesota-Duluth to teach science and outdoor education. In addition to teaching, Trockman coached the alpine ski team at Hopkins, but the head coach position became difficult to maintain when he started teaching at Blake. Now, he’s proud to admit that his teaching experience at Blake “is by far the best.”

Upper School Teacher Librarian, Lizz Buchanan manages the library space, teaches a class, helps with research projects, and is the advisor of Mr. Gazette. She also works with the digital parts of the library, such as Turnitin and NoodleTools, and the library resources that students get online are managed by Buchanan behind the scenes. Her research help includes “working a lot with teachers to figure out what their projects will be and how to help put together resources.” She looks over the project documents, making sure the project description makes sense and that it’s doable in the teacher’s set time frame. Buchanan enjoys going into classes, whether it’s for an extended amount of time or just for one class. This year, Buchanan is co-teaching an upper elective titled Topics in Local History with Margi Youmans. It’s a research intensive elective, so “that’s a lot of fun but boy it is a lot of work!” Other than her class, she also runs the senior program workshop with Sean Hickey, and she runs freshman orientation with Hickey and Scott Flemming. Lastly, Buchanan is a member on a committee that “thinks about how we assess and how we do grading… work[ing] with an advisory group where we talk about how the advisory program works.”

Kali Olson, Associate Librarian and Support Service Technician, describes her job as “doing both library and tech stuff.” While Buchanan does more of the classroom teaching, Olson works on the day-to-day jobs within the library space in order to maintain the room. Whether she’s sitting at the reference desk waiting to help students or teachers with their computers, doing book displays, communicating what’s going on in the library to the rest of the school, or working on the yearbook, she’s always busy with a certain task in the library. Olson occasionally goes on field trips with classes for research opportunities, and she also runs the library book club with Buchanan.

Technology Specialist Sean Hickey states that his official job title “means a variety of things.” He’s “simply [in the library] to help teachers and students with technology” in their classrooms, with projects and assignments, as well as with running a number of programs at the school. He runs ninth grade orientation, the senior program, and he teaches Computer Science classes in the Fall and Spring. Hickey states, “I started teaching computer science my second year at Blake, and this year there’s a number of students trying to get a programming club started,” so he’s been busy with advising the initial phases of “getting [the club] up and running.”

When asking Gary Spencer his basic responsibilities within the library space, he nonchalantly stated “I’m pretty much responsible for all 600 plus laptops and other computers in the business office downstairs.” Spencer himself manually repairs the laptops; he takes care of anything from repercussions after dropping a computer to water damage. Outside of the library space, his official title is Manager of Interactive Technology for the upper school, so he’s responsible for maintaining and installing all of the classroom projectors, smartboards, etc. Spencer also runs the Juliet Nelson Auditorium and the assemblies. He explains, “we have a group of students who rotate in the booth to help fun the sound and lights and that kind of stuff… [the music] is usually me. If there’s a song that I want to listen to or particularly like I play it that day, but a lot of times we’ll listen to the speech and be like okay this song would go well with that speech.” Although sometimes the speaker will suggest a song to be played after the speech, this year Spencer is trying to incorporate that more by talking to Greg Dawson and asking speakers to list a couple of songs they might want played to go along with their speech.