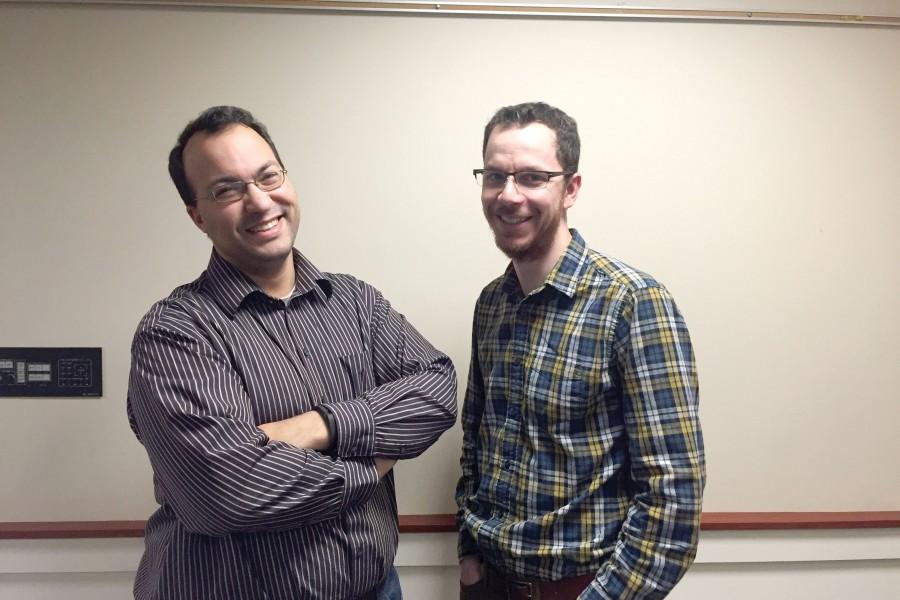 Jonathan Osters and Chris Robinson have developed a new style of teaching that involves making students fail, then having them learn from their failures

Everyone has had a test, quiz or project where they understood absolutely nothing on it. Ranging from English essays and social studies presentations to science labs and math tests, nobody can say that they feel confident on every assignment. That’s where Jonathan Osters and Chris Robinson enter the ring.

Osters and Robinson are two math teachers who have been developing a new style of teaching that helps students by devising ways in which the math that students learn actually sticks with them. This teaching style is called Experience First Math. They chronicle and detail the workings of their teaching style at www.experiencefirstmath.org, where they give examples of lesson plans that have worked well in their classes.

The Experience-First Math teaching method encompasses the idea of learning through failure and having students take ownership of their learning. As Osters explains, “the idea is that when you learn by trial and error, you build more developed neural pathways in your brain. All the brain research shows that when you learn by doing, the neural pathways develop stronger.”

Both Osters and Robinson structure their classes so that students are expected to fail. Osters describes some of the problems asked to students in class: “when you give students a problem that none of them have seen before, everyone is on an equally low plane. You see a problem and it might be familiar in that it might be similar to a simpler problem you have seen. So some people might be able to get through it all the way, some people will be able to get through it part of the way, some people will be stuck at the beginning, but the idea is that if you can develop a type of strategy to solving problems… someone who can do that can still learn a lot.”

One example of this philosophy or mode of learning is the question of “if we create a circle and place points along the edge, then connect all the points with line segments, how many regions can be formed in the circle?” One point is one region, two points connected by a line creates two regions, three points create four regions and four points create eight regions. Students begin to develop a conjecture of doubling the previous number of regions for every point added, but this conjecture breaks down when six points are connected. Depending on how the student oriented the points, there could either be 30 or 31 regions created. If all the points are equally spaced around the circle, the 21st region would become a single point, thus creating a total of 30 regions instead of 31.

As Robinson said on the blog, “The purpose of the activity is twofold: first, you can’t get so married to a conjecture that you are unwilling to amend it… [second] the role of proof in mathematics. To prove the things in math have the properties that they do is absolutely essential, and such proofs establish that we won’t run into unexpected places where our conjecture no longer holds.”

The second component to this style of learning is the atmosphere in which students learn. Robinson explains one of the ways he structures his class: “one thing that we say on the blog is that there’s a cheesy teacher technique called think-pair-share where you have to think about it yourself then talk to someone nearby you and then share it with the entire class. And the brain research really supports all of that. Thinking about it by yourself really allows you to have the time to make connections between different ideas. Talking about it proves that you have enough evidence to talk about it. Sharing it is to make sure that all of the groups are on the same page.”

99.9% of all people have more than the average number of ears”

This method of learning by failure and structuring the class in a way that is conducive to learning has shown improvements. While Robinson does admit that the math department hasn’t taken quantitative data on final math scores, he does say that “we do anecdotally know that students have done a lot better on the final over the past 5-6 years, particularly in courses that both Osters and I have taught. But the overall average on midterm and final exams have improved, maybe not every single year, but there’s definitely an increase from before we were trying to teach in this instructional style it to after.”

However, this style of teaching isn’t just restricted to the mathematics department. While the blog does talk about the math department exclusively, components of teaching style can be implemented in all departments in the school. So next time you’re struggling with a tough concept, think about it, pair with a student and explain it to them, then share it with a group of students. You may find that this method improves your command of the information.