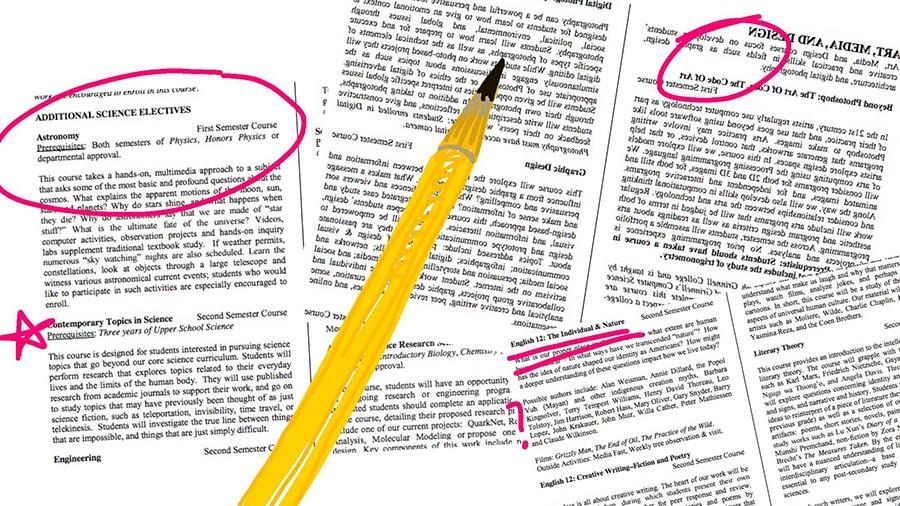 Karen Phillips, physics teacher and Upper School registrar, says the one tip is to create “a balanced schedule that suits your academic goals. We [teachers] don’t want you to dread through the year.” Whether it’s the pressure to take more advanced courses for college, parents, or simply expectations on yourself, it is critical to acknowledge your limits and take courses that interests you the most.

According to the course catalog, there are approximately nine new courses for the 2016-2017 academic year. When asked about the process of constructing new courses, Phillips said, “There’s some latitude, flexibility, and creativity. If I propose something for Science, I also get input from English and Social Studies.”

A new Science elective, Advanced Chemistry: Food Science, has already received positive feedback. Sarah Juang ’17 says she registered for “Food Science because it sounded practical.” Philips sees Food Science as “interdisciplinary.” Philips says, “It’s another lens to see chemistry. If you want to study the subject in a different twist, it will be a great fit.”

Cawood says, the new Literary Theory course will “take a global perspective on historical and modern ideas.” The so-called lenses will be used frequently to examine the process of that professionals take to interpret literary art. Seniors interested in philosophical aspects of literature should consider taking the course. Cawood adds that the course “ takes the idea of intertextuality”, which provides an opportunity to explore an interconnection among the dialogues of artists and theorists.  Students taking Literary Theory will reexamine novels from previous years through the lenses they select and discover what sorts of different meaning each reading yields. Literary Novel, an independent study, will meet twice a week for an entire year. It’s not classified as an English class. However, it is under a general curriculum that will count as a quarter of a credit.

In addition to the three new courses, the Shakespeare course will extend the length of the course to create that classroom community as an year long experience for the first time. Cawood says, “There’s been a desire to show how Shakespeare relates across the globe adapted into different versions in film and literature. We can look at the forms they take as they cross culture and time.” Cawood is excited, as Shakespeare course will be an experiment of an year long senior English experience.

Serena Swanson ’17 showed her interest in humanities courses. Swanson says, “I know that a lot of schools don’t offer Creative Writing or Native American Literature. Also,  it’s something that not a lot people think about anymore.” Swanson says that her experience,  taking AP Latin in sophomore year, helped her to make this year’s schedule manageable. Swanson says she’s definitely less stressed out than last year. However, Swanson says that there were downsides of taking easier courses. Swanson said she “didn’t have classes with her friends, with the exception of AP Literature.” Nevertheless, Swanson thinks it’s important to pick a class that interests you the most. To become a well-rounded person, Swanson believes that  it’s critical to take some challenging courses that interests you the most to get out of the comfort zone.

Among the Art courses, there’s a new visual arts course, Curatorial Studies taught by Bill Colburn. Christine Saunders, Chair of the Art department, describes the course as an “expansion of Art History.” As Colburn helped to facilitate student leadership of the Bennett Gallery and advised art independent studies, he has communicated with students who were interested in curating shows. Saunders says Curatorial Studies is “thinking of how to put things all together because you’re think about the layout of the art and an impactful audience.” Saunders added that the course will dedicate to teach the historical context behind artwork and demonstrate how professional shows are curated. The most advantageous aspect of the course is that the students get to use the Bennett Gallery as their studio to curate shows.

There has also been a revision in the performing arts courses. Women’s Chorus and Men’s Chorus, creating single gender choirs, will be replaced as Cantemus and Vocare, referring to a group who vocalize in the Latin language. Saunders says that the revision will apply starting in Middle school “to reflect more of the school’s forward thinking and work around gender identification. As faculty recognizes that there’s a vast spectrum of how people identify themselves, they chose a term that’s still musically centered and meaningful.