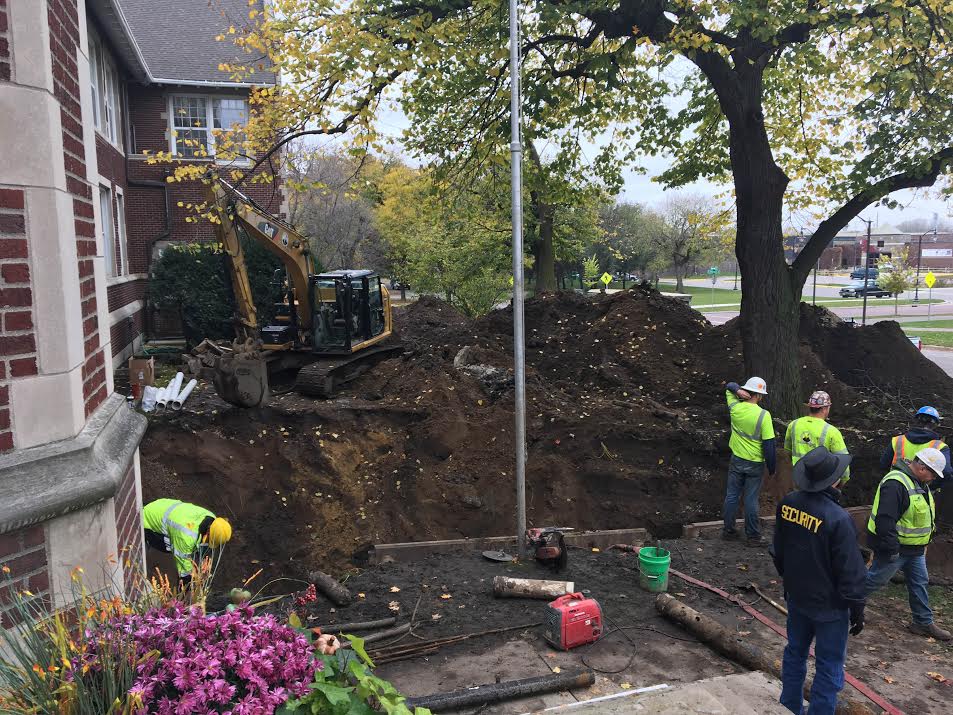 The large hole right by the main entrance to the school was the product of the main water line breaking and needing to be replaced along with the original, planned maintenance of the sewer line. (Lisa Uhler, Director of Buildings and Grounds)

The large hole right by the main entrance to the school was the product of the main water line breaking and needing to be replaced along with the original, planned maintenance of the sewer line.

Students sitting in the dark, Elizabeth Ben-Ozilio stuck in the elevator, and no access to running water were all products of a complication with repairs of the main sewer line in front of the school on Tuesday, October 25.

These problems caused classes to be relocated for the rest of the Tuesday, all of Wednesday, and all of Thursday, relying on virtual communication to students to complete classwork.

With little information about the cause of the power outage, many students were left hypothesizing about what had happened. Roshnee Tarafder ‘19 says, “My friend was like, ‘just wait a minute, the [lights will] go back on’, but we waited and they never went back on.”

Large-scale power outages like these are extremely uncommon at the school, so it was a shock to most students when the lights didn’t snap back on. “Until somebody said that ‘oh we get to go home’. . . I didn’t even believe it,” Mike Palakas ‘19 adds.

Steve Howe shed some light on the cause of the outage, though, explaining, “Sewage drain blocked up and was clogged. So, we hired a company to come in and unclog it.” The problem, though, was that the pipe was further beneath the ground than they had thought, and they had to dig between the domestic–drinking–water and fire suppression water lines.

The wall between them collapsed and broke the domestic water line. Howe says, “That’s why we had a pool out in our front yard, and why the boiler room got about 3 and a half feet of water.”

To fix the damage and repair the original problem, they had to dig everything out and “put in new sewer lines, put in new domestic and fire sprinkler system lines in, and now they’re filling it up,” Howe says.

The project was commissioned by the school, and was completed by Valley Ridge Plumbing Repairs. Steve comments, “They know what they’re doing. They’re pounding away and got it done.”

The virtual classes, though, were perhaps not as successful as many teachers had anticipated. The days off were not “snow days,” as Kelly Brakken ‘17 explains. (Story continues on News 3.)

They were relocations of typical classes, and students were expected to do all of the work they would’ve done at school.

Brakken says, “There’s some disappointment from some teachers who expected more, so I’ll just have to catch up this weekend with the stuff I missed.”

She also brings up another point that held true for most seniors with a November 1 early decision or early action deadline: “A lot of teachers expected that there would be 6 hours of classwork going on at home, but I had so much to do for college.”

In some ways, the time off was nice to be able to time manage our own time to work on college applications for a few hours, for example. Zahara Kahn ‘19, although not applying to college, says, “You have to do you own time management all day, it’s a good thing to practice but it’s hard.”

Steve says it simply when he explains, “If there’s no water, you can’t cook anything in the kitchen, so we can’t make food for you. You can’t flush the toilets, so there’s no reason to have kids here. It would’ve been a bigger mess than it is.” Students had to relocate and it was their choice, ultimately, whether or not to do all the work assigned to them, but there’s consequences for not being caught up.

Kahn says, “It’s really difficult since it’s the beginning of the second quarter, and some people are starting behind.”

This kind of disruption to normal school activities is extremely rare, so it was a shock to most students when classes were changed to virtual days. The repairs have been made, though, and water was functioning around noon on October 28. There are no foreseeable complications due to this construction in the water or sewage lines, according to Howe.