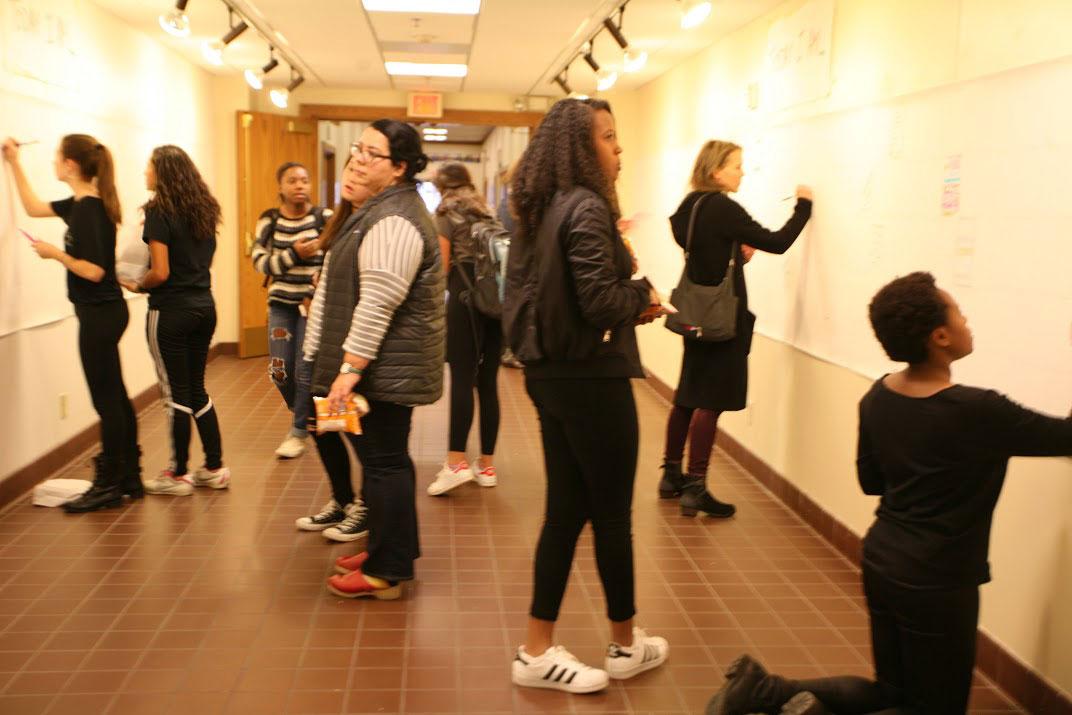 Members of the community add their contribution to the “Today I Am…” wall which included the name of everyone (students, faculty, and employees) and an equal space for them to create on the day of the inauguration.

Members of the community add their contribution to the “Today I Am…” wall which included the name of everyone (students, faculty, and employees) and an equal space for them to create on the day of the inauguration.

Both nationally and at school, protesting endures

With The New York Times estimating 470,000 people who marched in Washington for the Women’s March, and a reported 3.3 million nationally, the spirit of protest is incredibly ingrained in today’s generation despite critiques of an apathetic pop culture. But a single word, “protest,” does not describe adequately the multitude of motivations behind physically taking a stand.

Hazel DeHarpporte ‘19 decided to walk out of the school’s viewing of Donald Trump’s inauguration with other students, indicating a form of peaceful protest. When asked about her motivations, she says, “I think it is important to watch it, but at the same time, by walking out, I can’t speak for everyone, but for myself I am showing that I am allies with people of color, LGBTQ+ people, immigrants that trump has been targeting recently.”

For DeHarpporte, walking out was a symbol of solidarity for groups of people targeted for most of the Trump campaign and continuing to his presidency. In her opinion, rather than publicly dissenting the president, her protest was an act of support.

Scott Flemming, Director of the Office of Equity and Community Engagement, says, “Our country is founded on the idea of protest. [Protesting is] taking a set of norms, practices, rituals and questioning them as illegitimate. It is actively breaking free from that.” To Flemming, protesting is an active challenging of a set of opinions in order to hopefully make change.

The school’s argument for students to watch the inauguration was largely about education. In Joe Ruggiero’s speech, he mentioned that, as an educational institution, the school thinks that viewing the inauguration is about sharing a common text and respecting our country’s tradition of a peaceful transfer of power.

However, this begs the question, if students chose to walk out, were they signaling ignorance of the speech and protesting the transfer of power?

Anil Chandiramani believes that the walkout was not “tantamount to ignorance.” He continues, “I would also say the walkout did not in anyway undermine the peaceful transfer of power.” He says, rather, that it was a “a meaningful, principled, respectful form of political protest.”

Instead of viewing the walkout as motivated by the form–the actual event of the inauguration–and more motivated by content–the president and his beliefs themselves. This distinction is important in the conversation of political protest.

DeHarpporte says, “I think you should definitely watch. It’s educational and you should be well informed, and just because you sit there and watch doesn’t mean that you support Trump or are racist or sexist.” She believes, like Chandiramani, that walking out is a protest against the speech publically, but that doesn’t mean there isn’t value in watching the speech. In fact, DeHarpporte believes that it’s necessary to watch as an informed American.

Back to the Women’s March, most posters had anti-Trump sayings, pointing towards a motivation to protest the president himself. But other posters were pro-women’s rights, representing a more general motivation to stand up for reproductive rights, for example.

Protest is still existent in society, coming from a multitude of different motivations. Now, in our polarized political climate, it is increasingly necessary to speak out, show up, and contribute to dialogues about power, rights, and equality. Flemming says, “I love seeing that protest alive still in 2017.”