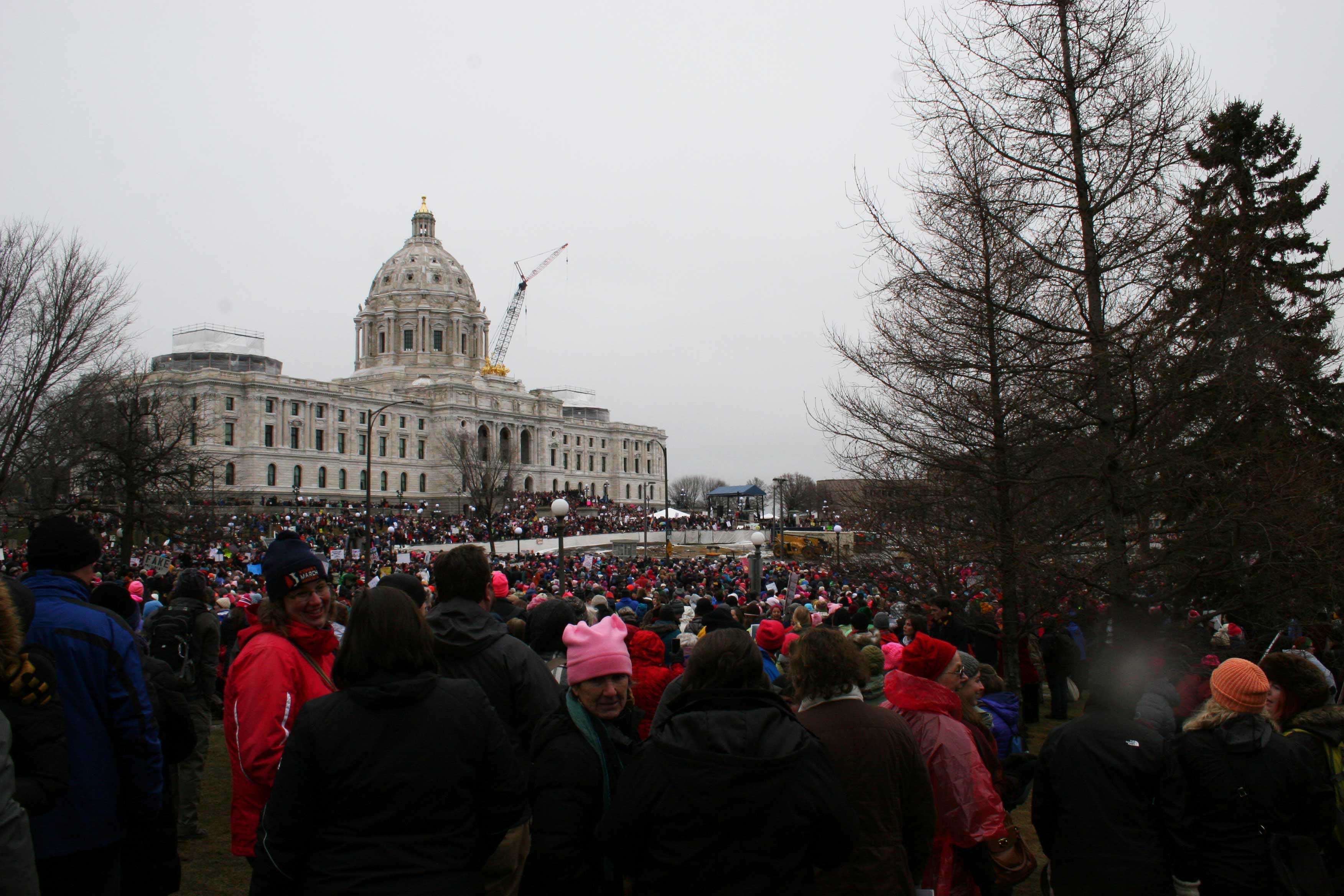 Protestors show up for women's rights around the world

The atmosphere was passionate and the same can be said for protests held around the world. Approximately 600 cities held a Women’s March making it one of the largest protests in United States history. In Minnesota, approximately 100,000 people marched according to the St. Paul Police Department and around half a million marched in Washington D.C.

The title, “Women’s March,” suggests that the march was was solely to promote feminist ideas. In actuality, the Women’s March was about much more. The Minnesota Women’s March website identifies that the march is for “women, people of color, American Indian and Alaskan Natives, LGBTQIA individuals, immigrants, religious minorities and people with disabilities. We march for the rights of marginalized communities, for just and equitable systems, and for the freedom of all peoples who make up our diverse nation.”

Numerous students and teachers from the Blake community participated in the Women’s March in Minnesota. The march started at St. Paul Technical College and walked to the Capital where there was a larger rally including notable speakers including two Senators, the Mayor of Minneapolis, Betsy Hodges, and many more influential women.

Some students had questions relating to the effectiveness of protesting, and what the impact of this form of demonstration would have. Beth Calderone addresses some of the critiques by saying, “I sometimes see protesting as a really stark position on issues that lacks nuance. You can’t have nuance on a protest sign.” She continues, “For this protest, it’s a solidarity move. There has to be a counterpoint to the incoming administration. This is going to be an ongoing movement. It shows on a dime we can mobilize if our rights are under attack. . . it shows that the numbers matter.”

The purpose of protesting for a lot of people was to show that despite having a president who doesn’t share their beliefs, their voice still exists. Annika Gutzke ‘19 shared her purpose behind marching by stating,  “I march for women and fight for the rights we have today, and I intend on keeping those rights.”

Sixteen busses from Minnesota arrived in Washington D.C. at six in the morning to join thousands of protesters at the Women’s March on Washington.

Gloria Everson, the Minnesota Chairwoman for the Women’s March on Washington stated that the reason for the march was “more than just who is elected. These issues such as wage, inequality, and police violence, they were there before,” but with the election, “it just highlights those issues even more” and she’s “thankful that now we’re really paying attention to the issues.”

The marchers started at a rally at the U.S. Capitol which was intended as a message for Congress. They continued to march towards the White House in sending a message for the new President. Everson stated that the message they were sending was larger than the rally and the march itself, saying, “we’re watching and if you do anything bad against any one of these groups: African Americans, Hispanics, LGBTQI, the disabled, you’re going to have to deal with all of us. It’s really just the first step, this is the start of something.”

Everson was surprised at how large the delegation from Minnesota became saying, “I didn’t think that it would get this big, I thought that we would have three busses, now I think there are sixteen or seventeen busses leaving from Minnesota.”

Describing the group going, she says that “we really have the entire spectrum, you have some women who brought their children, we have not so many, but some men, and so it really isn’t one particular age group or one type of person, it’s overwhelmingly female, but other than that, it’s a variety of people from age, etc.”

Sam Haj ‘18 attended the Washington D.C. Women’s March. She addresses the purpose of marching by stating, “I’m protesting because millions are going to be unsupported under Trump’s presidency, and that’s not okay. He has made one thing abundantly clear: the America that he is prepared to run is male, white, able bodied, and Christian. But the real America is so much more diverse than that, and those who differ from this narrow group need representation too.”

After the march, Everson wants to “make sure that all this momentum, this energy isn’t squandered.” She wants organize a “really large gathering [where marchers] can be matched with a nonprofit that does work that they’re interested in [to] truly get involved.”

Everson further states that “there are a lot of organizations in Minnesota that you can get involved in, and not everything will be a perfect fit for everyone, find the one that’s a good fit for you.”  For example, ERA Minnesota, Gender Justice, Women and Allies Minnesota (WANDA), and Women Winning are some local organizations to get involved with.