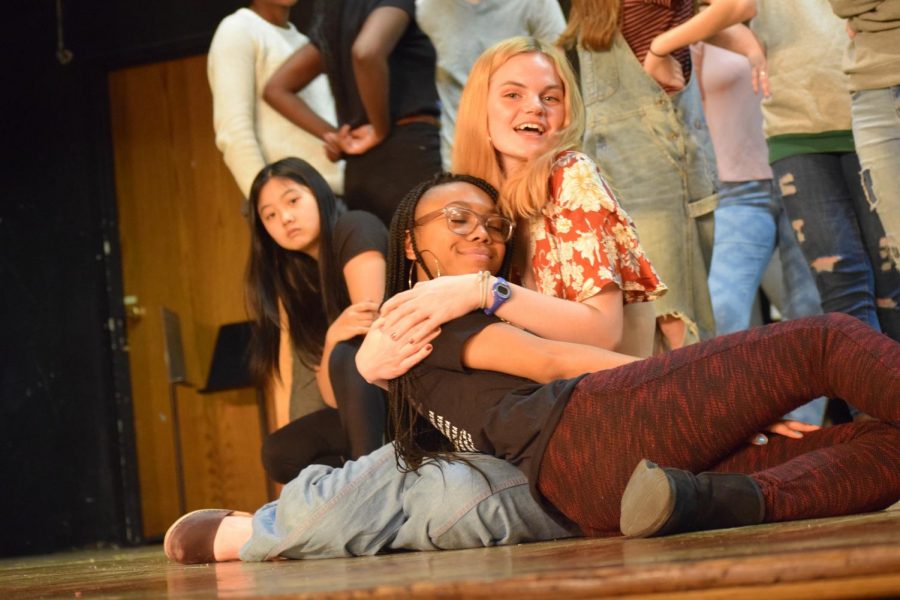 Cast, crew of Once on This Island provide insight on musical’s uniqueness

The Blake School musical Once on This Island opens Friday, March 9, and the cast and crew agree their hard work has come together to make a great show. Members of the cast have loved participating in this musical on and off the stage during rehearsal and speak to how it was as a commitment.

Anika Hahn ‘21 said, “It’s a lot more, not difficult, but… challenging,” in comparing the musical to her experiences with the middle school productions she took part in in the past. Anika comments that the process goes a lot slower but also in a way much faster than in middle school. One example that stood out to her was the choreography. Hahn commented, that during practice, the dances started off seemingly slow, but that as the cast continued to practice choreography it goes a lot quicker.

Audrey Ronan ‘21 also explained that the style of dance in the musical is different than any other production that she has been in before, making it a lot of fun to be a part of. She said that the moves are “less elementary,” which she likes also because it has a more of a cultural aspect. Landon McDermott ‘19 had also participated in several productions before, but he too enjoys this one for its unique style and love of working with the cast on and off stage.

In this sense, Hahn compares this musical to her middle school experiences, she says, “[The environment] is more professional but also a lot more goofy. On stage, it is more of a community than it was in the middle school.” She has absolutely loved being a part of this cast and working with the group of people. Ronan agrees about the tight-knit community that the musical has built.

“It is a really healthy, safe community,” Ronan said. Speaking of her love of having friends from theater she feels she “can always go to [them] at the end of the day [to hang out and just talk.]” Julia Hertzberg ‘18 plays the role of Mama Euralie and mentioned when she was a freshman and she didn’t feel much of a connection with the upperclassman, but that this year she feels she has built real connections and friendships with the freshman and sophomores that have joined theater this year.

As for the commitment that the musical requires, Ronan said that played fencing in the winter. So, she did have a few conflicts that caused her to miss some rehearsals, but overall, Ronan found that it wasn’t really a problem. Hahn explained that rehearsals took place in the evening so that they mostly did not conflict with sports and other school-related extracurriculars.

McDermott does engage in other commitments, causing it to be a little bit harder to fit in, but overall he’s found it very worthwhile. Hertzberg agrees, calling the eight productions that she has participated in during her time at the upper school an “invaluable” experience, and she felt that as the musical is her main focus for the two months, the commitment is not too difficult to balance. This is especially true during the beginning of the practices when each actor is only called for some of the rehearsal dates.

Overall, the cast and crew are ready to put on an amazing performance with high spirits and dazzling numbers for their audience!