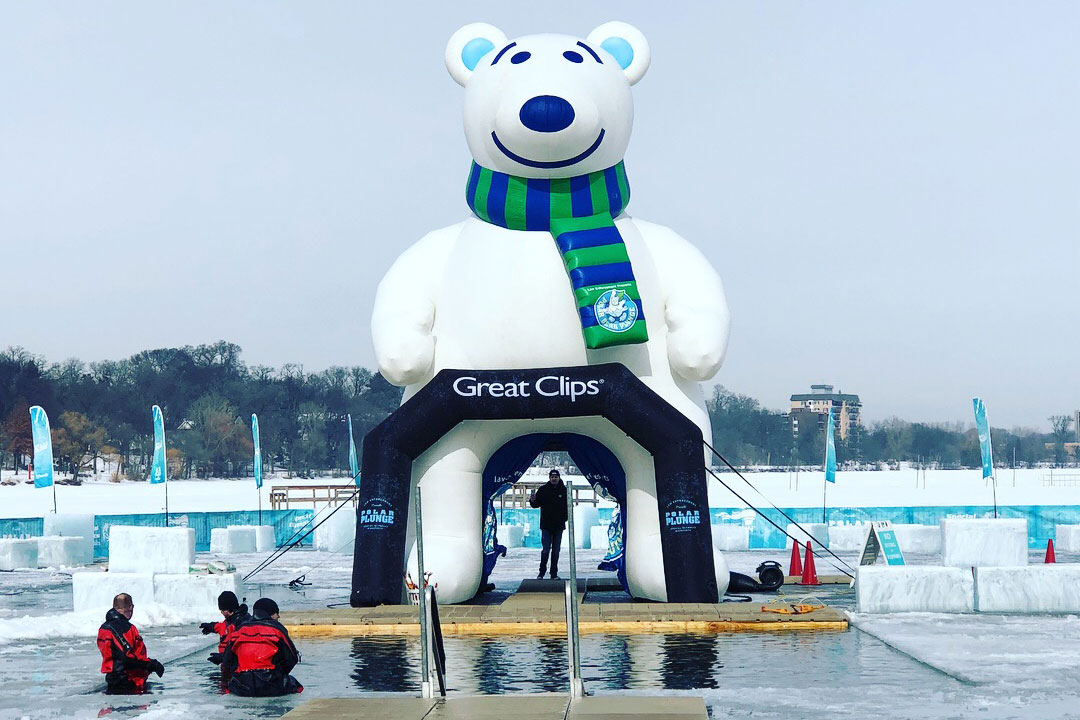 The plunge site at Bde Maka Ska with trained divers and EMTs ready to ensure safety of all participants. (Julia Kaiser)

The plunge site at Bde Maka Ska with trained divers and EMTs ready to ensure safety of all participants.

On Friday, March 2 a group of thirteen seniors, along with grade dean Shawn Reid, participated in a Polar Plunge event at Bde Maka Ska to raise money for Special Olympics. Twelve seniors raised over $75 each and Jessie Rudin ‘18 raised $2,073, meaning Blake’s group totaled over $3,100. Polar Plunge MN tracks the groups that raise the most money, and while Blake did not make the top ten K-12 earners, $3,000 will go a long way in supporting athletes with special needs statewide. According to Special Olympics USA it costs $35 to support one athlete through an entire season, meaning Blake helped almost 90 athletes.

The inspiration for the event came from Reid, Bea Buckley ‘18 and Rudin. Rudin, a four-time polar plunger, said “I’ve done it for the past four years, and I received an email from Mr. Reid about coordinating this whole thing and here we are. I think it is a very good turn out, and that a lot of people are gonna be nervous but once you’re in the water it’s just fine.” Buckley served as a rallier, trying to recruit as many seniors for the event as possible.

Although it was a chilly 27 degrees, nobody backed out of their commitment. Most members of the group were nervous, though. Reid stated “I’m nervous. I’m really not a water fan, but I’m gonna conquer my fear.” Some, though, were excited for the opportunity to try something different. Lucy Emptage ‘18 stated “I am stoked, pumped, and excited. I feel like today I become a true Minnesotan.”

Excited or nervous, every senior agreed that the ends justified the means. Abbie Nelson ‘18 commented on the event, saying “I think this is a great cause, and that it brings… people together, I just don’t know if I want to be in the cold water!”

Not all seniors at Bde Maka Ska plunged, however. Sean Leblanc ‘18, Pia Phillips ‘18, Connor Yu ‘18, Jessie Kang ‘18, and Shannon Ellis ‘18 joined the group but did not plunge. Kang said she didn’t plunge because “It’s so cold, and I enjoy the warmth. But I am so excited [for the group]. I’m here to take so many photos and be a great cheerleader.” Aditya Shekhar ‘18 also did not plunge, but worked as a DJ for the Friday events. Shekhar said, about getting the job of DJ, “Funny enough, the Polar Plunge dude and I just started talking [at Blake], and it turns out they have this stage going… and before the music festival this weekend they had an empty stage so they loaned it to me…” Shekhar added that he “totally would’ve plunged if I didn’t have this gig. I think it’s a great cause, and I’m really glad that some members of the senior class have shown up to do this.”

After plunging, the group was in consensus: the water was cold, but they still had fun. Lexi Fine ‘18 aptly stated “I feel phenomenal” and Cameron Odden ‘18 said “I would do this again.”

After changing into dry clothes, the group joined in the festivities of the Polar Plunge MN events, like roasting marshmallows, eating from food trucks, and listening to fellow classmate Shekhar mix music. All in all, the group of seniors were happy with their decision to plunge. Greta Hoffman ‘18 summarized “I feel refreshed, I feel cool, and I’m proud of myself and everyone who jumped, it was a great time.” Check out the videos of the two groups jumping into freezing Bde Maka Ska above!