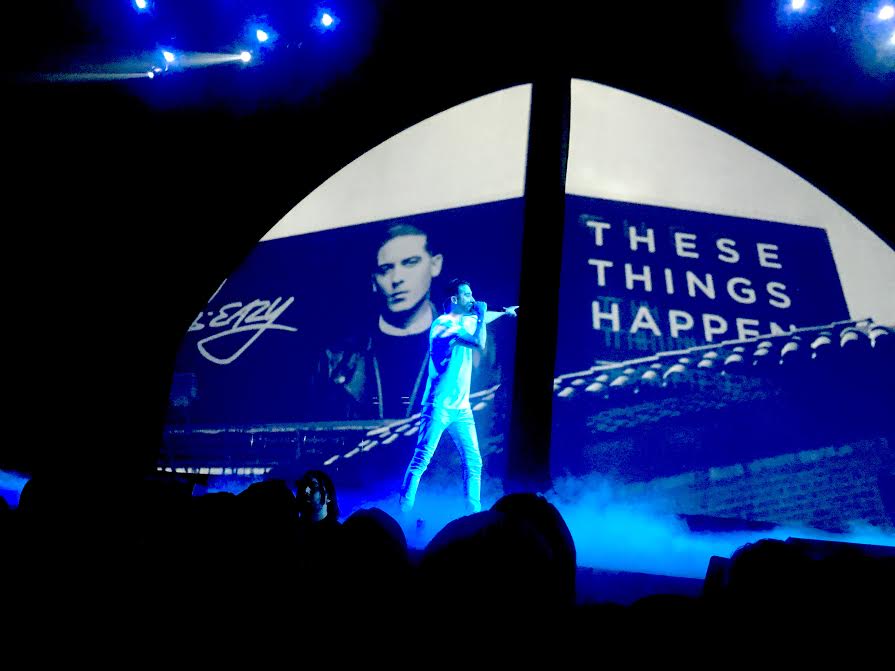 G-Eazy performs at Roy Wilkins Auditorium on March 8th as part of his Beautiful and Damned tour.

On the night of March 8th G-Eazy’s worldwide tour came to the Roy Wilkins Auditorium in St. Paul. Named after his most recent album, The Beautiful and Damned Tour brought all aspects of its title to life.

Often referred to by his real name, Gerald, the rapper has been to the state numerous times, highlighting his personal ties to it in each performance. When referencing Minnesota in his shows, unlike most other artists who artificially praise whichever place they’re performing in that night, G-Eazy’s stories and tributes seem as though he has a genuine and sentimental connection to the state, establishing a more intimate relationship with the local fans.

The show was split into three acts: “The Beautiful,” “The Damned,” and “The Epilogue.”

First part of the show, “The Beautiful”, included G-Eazy’s darker, more personal songs, mixed with some past hits to start the show and pump up the crowd. The tracks of this section accordingly corresponded to its name as Gerald played some of his classics along with some newer songs, reflecting on his past experiences and mistakes. He opened the show with the album’s intro track, “The Beautiful & Damned,” and further playing older songs like “Some Kind of Drug” and “I Mean It” to engage the crowd with his more popular tracks. He then played more music from the tour’s corresponding album, like “Sober” and “Pray For Me,” beautifully embodying what the section of the show is really about – finding beauty in the damned.

“The Damned” was the mid-section of the show, during which G-Eazy wore an all white outfit along with what appeared to be a straightjacket with “Damned” printed on his back, defining the rapper’s wicked and mischievous side. In this act, Gerald performed some of his more dated, explicit and up-beat songs such as “Calm Down,” “You Got Me,” and “Random,” along with some rebellious tracks from the new album like “Leviathan” and “Eazy.” This part of the show solidified the crowd’s excitement by interlacing older upbeat hits with his recent, equally edgy tracks.

The final act, “The Epilogue” featured some of his most popular songs, which instantly hyped up the crowd. He played some throwback tracks, like “Me, Myself & I”, and some more recent ones, such as “No Limit” and “Him & I.” This outro section of the show gave the audience a final chance to let loose, leaving the crowd with a sense of satisfaction from a complete range of sound from G-Eazy’s repertoire.

The concert was an unforgettable experience, thoroughly executing the criteria for an excellent performance. The setlist was a perfect combination of songs, interlacing newer and older music and emphasizing both, The Beautiful and The Damned elements of the show. Live, G-Eazy sounds even better than recorded and his aura inevitably produces an exhilarating atmosphere in the room. His life-of-the-party persona and energetic interactions with the crowd were vital in the success of his performance and left a positively memorable impact on his fans, ensuring future loyalty and support, especially in the state he feels so attached to.