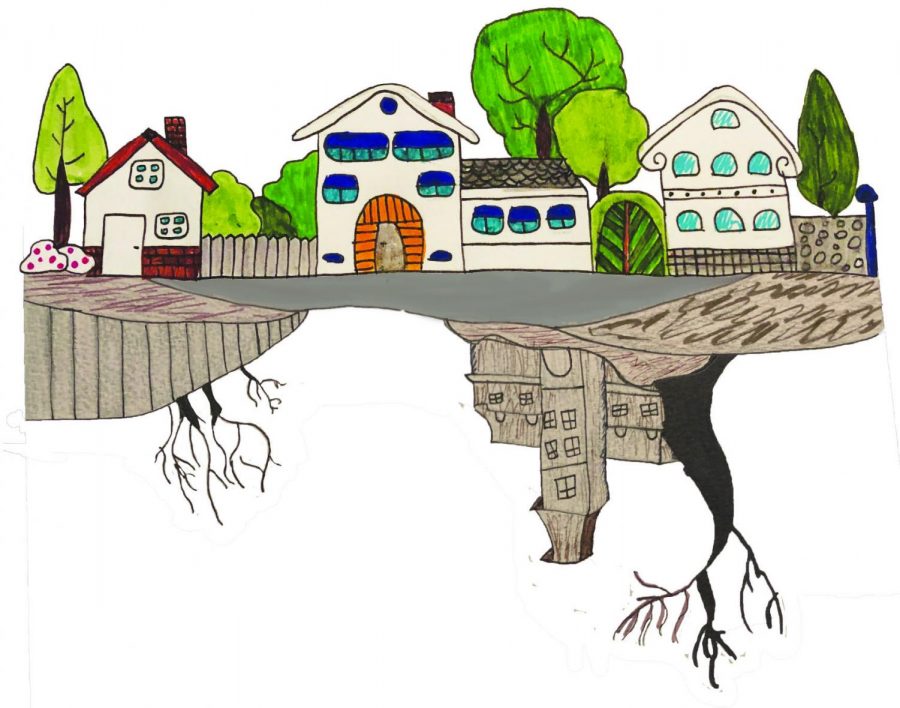 Defining the achievement gap in Minnesota

imply put, the achievement gap is a difference in the academic success of students. This difference is most commonly viewed in the context of varying socioeconomic statuses or ethnicities of students. The Minnesota Department of Education found in a survey from 2010 to 2013, the graduation rate of all enrolled high school students increased by an average of 5%. However, the graduation rate of students who identified as white was 85.27%, while this number was 57.75% for students who identified as black. This disparity earned Minnesota the distinction of having one of the worst achievement gaps in the United States, according to a 2019 study performed by the Federal Reserve Bank of Minneapolis.

This data only applies to Minnesota public schools, excluding independent school such as Blake. At these independent schools, achievement gaps look different, as there are many fewer students and often a demographic of students that is non-congruent with the makeup of the rest of the state.

Achievement gaps rise out of school and community influenced factors. While exact causes vary on a case-by-case basis, systemic and ingrained biases and racism leading to lower expectations for students of color heavily contribute to this gap, in addition to the inability of overwhelmed and overworked teachers to give adequate attention to each student. According to the Minnesota Department of Education, resolving these gaps requires all students to improve over time, with those that are behind accelerating to catch up to those who are already performing well.

While this gap may not be glaringly obvious at Blake, the existence of such a gap is still valid, especially as a prominent independent school in Minnesota, a state that continues to struggle with acknowledging and working to resolve these disparities in the success of its students statewide.

Redistricting Helps, Does not Solve the Root of the Gap

Even though the achievement gap may seem like an issue far away, affecting far away people, one of the cities with the largest disparity between low and high performing students is our very own Minneapolis.

This complex, multifaceted issue can be traced back to the post civil war era, where slavery became abolished, leading to many freed slaves migrating north. While it may have seemed that racism only affected the South, that is actually inaccurateññit just took a slightly different form in the North. In Minneapolis, neighborhoods created racial covenants, which eventually provided loopholes around anti-segregation laws.

These covenants would ban all except white citizens from inhabiting certain neighborhoods, leading to clustered, segregated areas all throughout Minneapolis. In addition to racial covenants, many banks refused to offer anyone other than white citizens mortgages on their houses.

This fed into the racial divide in Minneapolis, as poorer people were lumped together in neighborhoods, and eventually into poorer performing schools because of the lack of tax funding from the respective neighborhoods. This created a large divide between higher and lower performing schools that corresponds to the socioeconomic backgrounds of the taxpayers from each district.

There is a wide variety of proposed solutions to this issue, many of which are being discussed throughout Minnesota Public School Districts. Schools have started looking into redistributing which neighborhoods will feed into which schools in order to desegregate the schools and even out their funding.

While I think that this is a good start to try and solve this issue, many people will be dissatisfied with switching from their preferred school to the newly-designated school. Another solution would be to try and integrate each neighborhood more, but this proves difficult as people do not always have the financial means to move or would like to move, in order to change around the school districts.

Working at the source of the problem, the neighborhoods, may eventually solve the problem, but is  made  very difficult because of gentrification. If the neighborhoods that feed into lower-performing schools are gentrified, many of the families will be unable to afford their homes, leading to the problem being moved elsewhere, or the students having lower performance from stress in their home life. This is another facet of the issue, as children with unstable homes will often perform lower academically.

The achievement gap is a very serious issue in Minneapolis, as it affects the whole population and the future leaders of the city. Children are not given equal opportunities at different schools, due to the lack of funding, segregation, bad home situations, and school placement, leading to a growth in the disparity between childrenís academic performances.

There is not one good solution for an issue of this volume, which proves it very hard to try and mitigate. Without the openness to change from all families and people, this problem will be near-impossible to solve, but with cooperation and new, innovative ideas, I believe that this problem can be solved and an equal, free education can be possible for all students in Minneapolis.

Students reflect on the division they feel

Considering Minnesota’s notoriously large academic achievement gap, how might that manifest itself in a private school like Blake? Many students in affinity groups at Blake asserted that such a gap exists, but perhaps not in a manner that mirrors Minnesota as a whole.

But while Pauly, a Highcroft alum, mainly focused on the internal factors on the Blake educational experience, Hannah Saeed ’21, a Blake student since 9th grade, mentioned how external factors, such as a studentís educational experience before they come to Blake play into their Blake academic experience. Saeed states, “People who come from schools outside of Blake might have an achievement gap that you know already comes with the package before they even get here like considering the curriculum and the teachers and the funding of the schools they went to before they got to Blake.”

Furthermore, both Pauly and Saeed arrived on a consensus that in scenarios where any such achievement gap manifests itself,  Blake actively seeks to close it. Pauly spoke towards Blake’s role in her academic career as it relates to her identity as a minority, stating, “I definitely feel like, in terms of being supported, as someone of a minority, I feel like there are definitely many people who have reached out just to make sure that there isn’t as much of an achievement gap, that there is less of one.”

Drawing on her experience as a new Blake student freshman year, Saeed felt Blake’s active involvement in the issue from early on. Saeed stated, “I just really think all the deans try their best to make that gap smaller in any way they can, especially if you come here in high school.”

Pauly and Saeed also brought up other instances in which Blake acts as a platform for discourse on diversity, whether it be in the texts we discuss in class or displays in the art gallery such as Louise Ba ’20‘s recent showing. As Pauly stated, “I think that Blake is consistently and actively reaching for a small achievement gap, almost a zero achievement gap.” 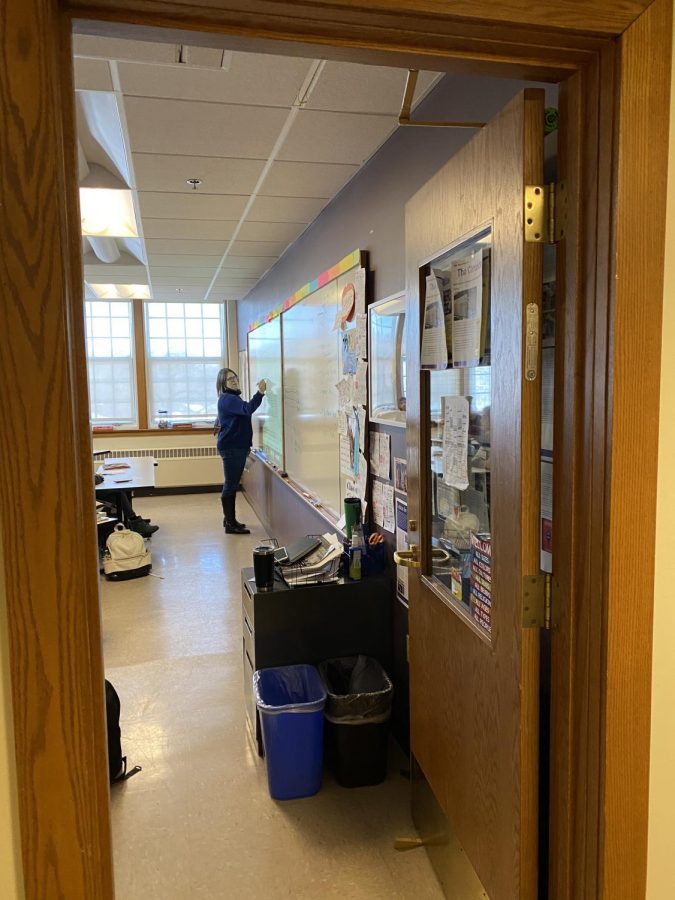 Beth Calderone stands at the whiteboard, teaching a Microeconomics class to juniors and seniors.

Although the achievement gap mainly surrounds students, one important facet is the aspect of the teaching influence.

Traditionally, the use of such strategies like straight rowed desks and bells aimed to produce factory workers during the 19th century. Despite the recent emphasis on critical thinking, Beth Calderone, Social Studies Department Chair, argues “those structures haven’t really changed, we still have schooling you compulsory do from eight to three and you show up a, it feels factory.”

Furthermore, Blake’s emphasis on college preparation creates a narrow definition of success that relies on ranking individually.  Calderone continues, “The SAT was not to see how smart or how well you achieved, it was to rank people… [the letter grade] system creates an environment that sets up a culture that values individual achievement over everyone else’s collective.”

This ranking that sets up a system that values the individual over the collective could allow some cultures to thrive and others to struggle. Calderone says, “There are a lot of communities, where that success is not as highly valued.”

When reflecting on a Blake-specific level, Anil Chandiramani, English teacher, pinpoints “students that come in with three or four learning differences… I don’t have the training to sometimes work with those kids.”  As numbers have risen for students diagnosed with learning disabilities to nearly 33% in the current Freshman class, this specific issue has increased in urgency.  He proposes, “I think [solving the issue] would require more learning specialists… and more content support.”

Culturally speaking, Chandiramani says “[faculty] will get a special note about Jewish holidays… or Muslim holidays, but I have never gotten such an email for a Hindu holiday… In fact we had conferences one year on Diwali which is the most sacred Hindu day.” Moreover, often students suffer due to having to study during a religious holiday. Chandiramani proposes ìmore guidelines around holidays and workî to end hard deadlines for assignments or tests.