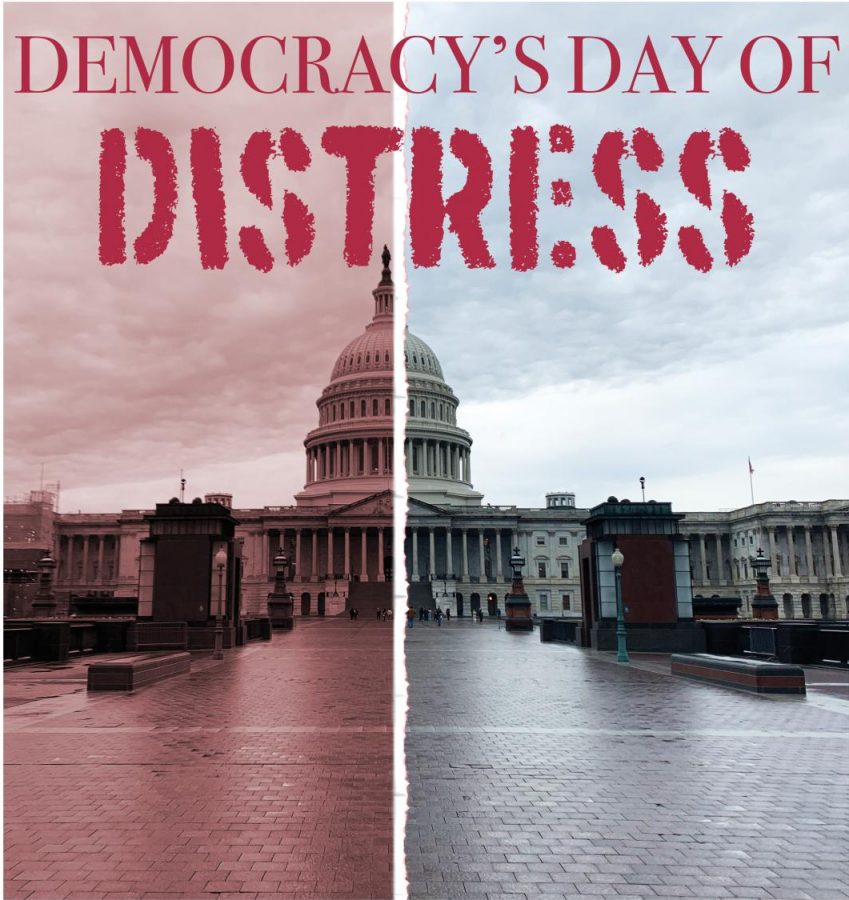 Democracy and democratic processes were tested at the U.S. Capitol on Jan. 6 as the country continues to widen its political divide

On Wednesday Jan. 6, 2021, the world watched in horror as a mob of Trump supporters attacked our nation’s capital and the democracy that it was built upon. The attempted coup was horrifying and disgraceful, yes, but it was not surprising because our democracy has been under attack for years and the Trump Administration has only exacerbated the divide between political parties and emboldened citizens to respond with violence.

Lorna Kruesel ‘21 says, “[I] was surprised that something like this didn’t happen sooner” due to the hypocrisy that is Donald Trump and his supporters. Hundreds of pages could be filled with “notable” events that have occurred during the Trump Administration but the final months of his term have displayed a fundamental breach of our democratic values.

Americans have previously been inclined to identify this nation as a “first world country,”, “developed,” “liberty and justice for all,” and “democratic” but this past election has made a mockery of democracy in America.

Payton Crosby ‘21 was taken aback by the hypocrisy of the attack, saying, “these people claim to have undying love for this country and then straight up disrespect it.” Over the past five months we’ve seen everything from baseless accusations of fraud to national voter suppression, leading us to question the future of our country.

On Jan. 6, President-Elect Biden published a tweet that addressed the attack, “Let me be very clear: the scenes of chaos at the Capitol do not represent who we are.” After watching first hand the horrors of the Trump Administration and their followers, I do not believe Biden’s sentiments to be true. Donald Trump has contributed to the growing hate in this country over the past four years, but when he leaves office all this hate does not magically disappear with him. Crosby says the attack in itself was horrifying, but “it really was scary to think about how many people still support [Trump].”

For years, right wing politicians have been tampering with democracy through acts of voter suppression. Voting is the only concrete way to force our voices into the ears of our elected officials, and the republican party has made voting increasingly difficult over the years. A pandemic infested 2020 election has shined light on this ugly truth. Voter suppression has been around for decades and is an act of treason against this so called “democratic” nation.

In the post Reconstruction era, Black voters were denied their right to vote through intimidation tactics, violence, and literacy tests — of which illiterate white voters we’re not subjected. In Shelby County v. Holder, the Supreme Court ruled, in 2013, that section 4(b) of the Voting Rights Act was, in the opinion of the court, inoperative because the discriminatory voting practices had been “eradicated”. This allowed for states to enact strict voting laws that targeted voters of color, such as requiring photo ID, new restrictions on voter registration, and the closure of polling stations where the voters were predominantly BIPOC.

We are still seeing the repercussions of Shelby County V. Holder to this day. In 2020, Texas governor, Greg Abbott, hastily issued an order that only allowed one ballot drop off box per county.

Harris County, a predominantly Black and democrat country with 2.4 million registered voters has one drop off box. Meanwhile, Rhode Island, which is 500 square miles smaller than Harris County, had 39 drop off boxes. Regardless of the hurdles American’s had to face in order to uphold democracy, at least 161 million people did their part and voted this election season.

The United States’ Congress, The Supreme Court, and Donald Trump did an injustice to democracy and to the American people. Kruesel says, “There are certain things that you cannot do as president and one of those things is inciting violence.”

As the current generations of Americans, we must remember that, even though Trump is no longer president, our nation needs repair. We must hold our elected officials accountable to uphold the democracy that Trump, his administration, and his supporters have done everything in their power to annihilate it.