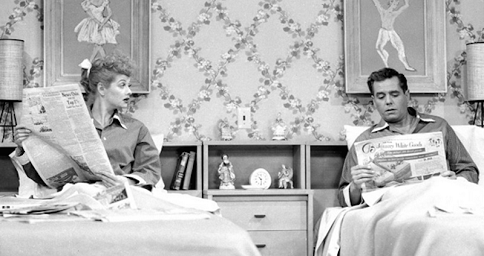 When “I Love Lucy” ran between 1951 and 1957, Lucy and her husband Ricky had to sleep in separate beds, as to avoid some sort of scandal.  The show even feared a cancelation when Lucy had a second child, and the term pregnant was forbidden on TV.  Compared to the state of television in the 21st century, the conservative attitude taken toward sex on TV may suprise the new generation that has only ever known a world where sex on TV is commonplace.  Since “I Love Lucy”, sexualization on TV has steadily risen.

By the 1960’s, TV couples such as Darren and Samantha Stevens in “Bewitched” could share a bed, but not much more.

In the 1980s, primetime TV became more provocative with soap operas like “Dallas” and “Falcon Crest“, and dramas like “Hill Street Blues” and “NYPD Blue”.

By the 1990s, cable channels like HBO, Showtime, and MTV reduced expectations for limitations of sexualization on TV.  Shows like “L.A Law”, “Dawson’s Creek”, and “Without a Trace” repeatedly changed taboo throughout the 90s and 00s.

From 1998 to 2005 the number of sex scences on TV doubled, reaching 75% of primetime shows by 2005.  While changing TV norms can be mostly attributed to these changes over time, the shift in the tone of TV also heavily contributed.  In the past, TV shows were seen as mass-appealing and crass, compared to the more artistic and boundary-pushing movies.  Over time TV has become more sexualized, and movies have become less, essentially switching roles in media.

Movies now try to appeal to a larger family oriented audience and TV takes on movies’ former role as artistic and boundary-pushing.  Recent TV dramas like “Game of Thrones”, “Scandal”, and “The Affair“ continue the trend of explicit content on TV, continually changing what viewers see acceptable.  Today, sexualization is not only accepted on TV, but expected.

How exactly is this characterization an accurate representation of American teenage life? Well, it’s not, and the real, living teens face the consequences of this poor representation. Teens learn by example, and television falsely portrays what constitutes an “ideal” teenager. Female characters are constantly oversexualized and depicted in seemingly unhealthy relationships, normalizing this behavior for teens.

On one hand, depicting sexual relationships in teenage characters teaches real-life teenagers that relationships and sexual interactions are normal and should be discussed. As teens grow up, it is crucial for them to learn how to have healthy conversations about sex and learn how to participate in safe sex. However, sexual characterizations on TV are constantly overexaggerated, dramatized, and quite unrealistic. For instance, Aria Montgomery, a protagonist in the show “Pretty Little Liars” dates her English teacher at age 16. While it’s an entertaining story, how exactly does it teach girls what constitutes a safe, acceptable relationship? It doesn’t, and television shows idealize sexuality and sexual interactions, forcing teens to misconstrue what is healthy relationship culture and set high, unachievable sexual standards.

Camila Mendes starred as the 16-year-old high school sophomore Veronica Lodge in “Riverdale” when she was 22 years old. Chase Stokes played 17-year-old John B. Rutledge in “Outer Banks” when he was 28. These actors are setting high and completely unreal standards for teens, teaching them that the “ideal” teenager looks like an individual in their mid-20s.

Teenage girls, in particular, are targeted by the media’s hypersexualization of their gender and age group. Tim Winter, the President of the Parents Television Council (PTC) stated that “the results from this report [“TV’s New Target: Teen Sexual Exploitation”] show [directors’] eagerness to not only objectify and fetishize young girls, but to sexualize them in such a way that real teens are led to believe their sole value comes from their sexuality.” TV shows falsely teach teenage girls that their intrinsic value is sexually-based: girls learn that their objectification is not only socially acceptable but it is “ideal.”

While there are series like “Sex Education” that depict teen sexuality and sexual interactions in a much more realistic way, many more people watch the dramatic teenage “soap operas” because they are entertaining. Obviously, TV shows are created for entertainment, allowing individuals to escape from the real world. Television series are created to entertain an audience and retain the most viewers; however, TV broadcast companies must be more careful about what they broadcast and how they rate their shows. All too often, teens conflate what they see on TV to what happens in real life, a dangerous practice especially for today’s popular shows. Without a fully developed prefrontal cortex, teens have a much more malleable brain, impacting their ability to reason and separate what is seen on the screen from real life.

We need to think critically about what we broadcast to the greater population and how it is negatively impacting teenage populations. Teens are known to mirror what they see, so how can our teenage population be expected to have safe sex, realistic expectations, and healthy relationships if television shows constantly show them otherwise?

Steamy, escapist, exhilarating, and contentious are only 4 of many words that describe Netflix’s most watched show “Bridgerton”.This show is a period piece with a hint of modernism, known for its hyperbolic sex scenes. The modernism aspect of this show is represented through the romantic connections that are built between characters.

The show’s over exaggeration is what attracted its many viewers. The controversy with “Bridergton” is that it oversexualizes women. For example, in episode 5 the eldest Bridgerton brother (Anthony) goes to an art studio and draws nude women for his own pleasure. The controversy here is that it is only women being painted and not men. Typically for figure drawing, there are both men and women. Which for the Regency era was probably the “norm” but when watching this scene in 2021 it shows women as underpowered compared to men because the women are the only subjects being drawn and not the men. I believe this scene isn’t right for young women to watch because in 2021 we are trying to move past the stereotype of women and go towards a more equal society. You could also argue that it’s important to learn about how women were treated back then so then women know what’s right and what’s not right. Both arguments are valid and crucial for people to see and understand.

Another controversial aspect of “Bridgerton” is how Simon Basset (The Duke of Hastings) takes advantage of Daphne’s innocence. He tells her he can’t have children but what he really means is he doesn’t want children. When the two have sex he uses the “pull out” method but Daphne has limited sexual education and she believes his lie, letting him get away with it. This lie that Simon keeps up for a couple of episodes is another example of how women are underpowered. In those episodes, it shows that the man has more power then the woman in a marriage which isn’t right especially in today’s society.

“Bridgerton” is one of many shows that sexulizes women, like in “Game of Thrones’” there’s a constant mistreatment of women. Which is probably due to the fact of the time period in which this show is taking place just like “Bridgerton,” “Game of Thrones” seems to take a few steps back from the idea of progression. Majority of the women on the show are abused or forced into a marriage. In this sense the men take control and women are just there for support. The show is a bad example for what women in life today should be portrayed or treated. The sexulization of women in TV shows makes the show more desirable to watch. Next time you watch a show like “Bridgerton” or “Game of Thrones,” think about how those scenes are influencing society today and is it really a good idea to support a show with that kind of influence on society.