In light of the abortion ban in Texas, many have been troubled with the lack of consistency from the Texas government. Activists have found it confusing that Texas Gov. Greg Abbott announced an executive order in Aug. 2021 banning government COVID-19 vaccination mandates in the state. However, after signing the new abortion law, Abbott tweeted that every “unborn child with a heartbeat will be saved from the ravages of abortion.”This political cartoon aims to call attention to the hypocrisy, and even irony, within Texas laws.

The past couple of months the topic of abortions has been popping up in the news more regularly. In Sept. 2021, The Texas Heartbeat Bill was passed. This law bans abortions after six weeks with no exception to rape or incest. At six weeks cardiac activity is detectable in the fetus but many women do not know they are pregnant at six weeks. This controversy brings up questions of if this law is ethical or fair to people. Do women have any control over their personal health with this law?

Mackenzie Mcilmail, Social Studies teacher, said, “[The] Texas case essentially deputizes everyday citizens to be able to sue anyone who helps provide an abortion. So that could be the abortion doctor or it could be the guy who drives you [the patient] in an Uber to an abortion clinic.” The Texas law is causing women to have less rights and individual citizens in Texas to have more over a pregnant woman’s body. This interaction is strictly just between citizens of Texas. The government doesn’t have any power in this, they can’t control who brings lawsuits forward.

This is not the only abortion law that has brought up controversy. Mississippi is challenging Roe v. Wade which protects a woman’s right to get an abortion without excessive government restriction. If the Mississippi law is found to be constitutional then this would overturn Roe v. Wade. Mcilmail said, “The interesting thing is in Mississippi, they’ve moved back the point of viability. The Supreme Court set this standard after Roe v. Wade that abortions can be allowed up to the point of viability which they determined is 24 weeks.”

If Roe v. Wade is overturned, this could cause 12 states to ban abortions after the first trimester of a pregnancy. These 12 states are called trigger states which have trigger laws, meaning that they have an unenforceable law that could be enforced if a key change in circumstances occurs. In this case, the key change would be overturning Roe v. Wade. The Mississippi case is still being argued in the Supreme Court right now. Mcilmail says there are two possible ways the court could rule this case: “The court could either say that’s the new term of viability, 15 weeks and that’s going to allow abortion bans across the country at 15 weeks. Or, they could just overturn Roe v. Wade altogether.’’ However, we probably won’t hear the results of this case until the end of June 2022.

When thinking about these abortion bans it’s important to think about women who are pregnant and have to carry this child for over nine months. Mcilmail said, “When we think about taking abortion rights for women it doesn’t just become you [the patient] can’t get an abortion, it’s forcing women to give birth and in a lot of these situations, there are certain jobs you can’t do if you are pregnant, you might have to take maternity leave which means you are not getting paid because we don’t have paid maternity leave in this country.” When considering this issue, it is important to think about all the factors which include the process women have to go through when pregnant. They aren’t just supporting themselves but also another life. These abortion bans give women limited freedom to chose if being pregnant and having a child is the right thing for them.

The silver lining to this issue if there is one, would be that more people are talking about it, especially young women. Mcilmail states, “I think a lot of younger women are more tuned into this issue. Technically [they’re] the ones that will be most impacted.” Mcilmail continued, “It galvanizes women to get out and vote, the vast majority of Americans support abortion rights and when you start polling women the numbers are even higher.” This issue could encourage more women to vote and stand up for women’s rights. This is not an issue that should be ignored.

In a survey sent to all four grades at the upper school, 216 respondents shared their opinions on abortion rights and the recent news surrounding the topic. 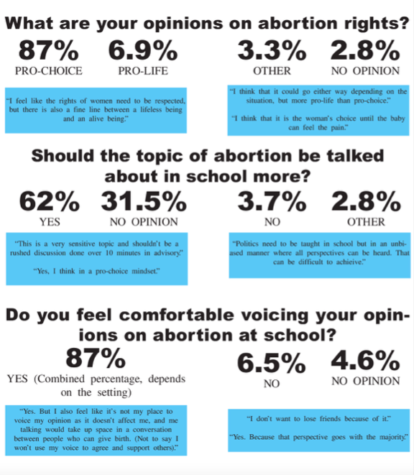 “To Say What the Law Is” – John Marshall

Abortion is one of the most contentious subjects in American society. For 49 years, abortion policy has been dictated by the Supreme Court, not the people’s legislative representatives. In Roe v. Wade, the Supreme Court established a controversial right to abortion which will be reconsidered this year in Dobbs v. Jackson Women’s Health.

Roe v. Wade began when Norma McCorvey, a Texas woman using the pseudonym Jane Roe, sued district attorney Henry Wade over an abortion ban. In 1973, the case was brought to the Supreme Court. Writing for the Court, Justice Harry Blackmun asserted the Fourteenth Amendment protects a generic “concept of personal liberty,” including marital privacy. Since an unwanted pregnancy could cause distress, Justice Blackmun reasoned that privacy must include a right to abortion.

Justice Blackmun’s rationale used substantive due process, a doctrine espousing that “fundamental rights” such as the “concept of personal liberty” are protected under the Fourteenth Amendment’s due process clause. The clause’s text reads, “Nor shall any State deprive any person of life, liberty, or property, without due process of law.” It does not mention “fundamental rights,” and permits protected liberty to be taken with due process.

Justice Blackmun then created a trimester framework to balance abortion rights against other interests. Only restrictions presented by basic medical rules were allowed in the first trimester. In the second, regulations had to be “narrowly tailored” to protect the woman’s health, and abortions could be banned in the third trimester. Justice Blackmun’s trimester framework is nowhere in the Constitution and may be considered judicial legislation, a violation of the separation of powers.

In Planned Parenthood v. Casey, abortion providers sued over Pennsylvania’s spousal notification and parental consent requirements. Upon reaching the Supreme Court in 1993, the state requested Roe be overturned and the restrictions upheld. Justice Sandra Day O’Connor’s plurality opinion upheld Roe out of respect for precedent, but changed the enforcement structure: before a fetus could survive out of the womb, no “undue burden” on abortion could be imposed.

Today, the Court is ready to reconsider Roe. When Mississippi prohibited abortion after 15 weeks of pregnancy in 2018, abortion clinic Jackson Women’s Health sued and asked courts to strike down the law. Last year, the Supreme Court decided to review the case, Dobbs v. Jackson Women’s Health, hearing oral arguments in December 2021. Justice Brett Kavanaugh’s remark, “Our Constitution is neither pro-life nor pro-choice,” foreshadows the eventual ruling: given that a majority of our Justices use literalist interpretation, Roe will probably be reversed.

Justice Antonin Scalia’s dissent in Casey explains the question before the Court, “not whether the power of a woman to abort her unborn child is a ‘liberty’ in the absolute sense, or even whether it is a liberty of great importance to many women… The issue is whether it is a liberty protected by the Constitution of the United States.” Since “the Constitution says absolutely nothing about it,” I expect the Court to, in the words of Justice Scalia, “get out of this area, where we have no right to be, and where we do neither ourselves nor the country any good by remaining.”

This year, the Supreme Court will likely return to originalist principles of interpretation and overrule Roe v. Wade. The judiciary, holding only the power to interpret law, has no role in crafting policy. For the first time in almost 50 years, the people would dictate abortion policy through their elected representatives. Your author asks two things: first, research the issue and decide whether you support or oppose legal access to abortion. Second, vote for federal and state politicians who share this view.

Abortion is an international issue, and with the potential overturning of Roe v. Wade, abortion restrictions throughout the United States continue to challenge peoples’ constitutional rights to abortions. Though the issue is typically viewed through a wider scope, as the new generation of people rises, it is also an issue that affects those in our community at Blake. Students have different opinions on the issue and a multitude of experiences with abortion, whether directly or indirectly.

In Minnesota, the right to an abortion is protected by the 1995 Doe v. Gomez ruling. However, in 2019, a bill to fully ban abortion after 20 weeks of pregnancy, except for in the case of near death or serious injury, advanced in the Minnesota Senate and almost through the Minnesota House of Representatives. Though the bill did not pass, its proposal served as a reminder that historical precedents can always change.

Current Minnesota law states that teens under 18 years old are not allowed to get an abortion unless they receive parental consent or have a judge rule that they are allowed to bypass the requirement. They can get an abortion if they are emancipated, meaning they are no longer under the control of their parents. Once they are able to obtain an abortion, patients are also required to undergo counseling that discourages abortion before their operations. However, there are other factors to consider, such as complex family dynamics that can make these processes difficult.

“It’s the future…if it doesn’t affect you right now, it will in the future, whether directly or indirectly.” – Sam Hardy ’24

When asked about their opinion on abortion in general, Graham Heathcote ‘22 observed that, “The ways in which we have political battles over abortion is pretty inefficient. Regardless of whether you are pro-choice or pro-life, passing policies to shut down abortion clinics for arbitrary reasons as a means to stop abortions is not a good use of funds.” Specifically pertaining to discussion within the student body, Sam Hardy ‘24 noted that, “[Students] get caught up that it’s a political thing [abortion rights] because of other political issues that they get grouped together when it’s really not a political issue but a human issue… and not whether you are a Democrat or Republican.”

Although it may seem like an issue that does not affect us, abortion has a lasting impact on many communities. Chad Woerner ‘22 observed that, “[Abortion] affects every generation and more mothers and parents, but it has implications that go on to all families. Surely many people in the Blake community have had to be confronted with making these decisions.” Similarly, Grace Flikke ‘24 pointed out that abortion can “Affect anyone’s future, [and] can still affect you even if you are not able to get pregnant.”

When asked about why our generation as a whole should care about abortion, Hardy stated, “It’s the future. Every issue, whether political or not, is the future of this world. If it doesn’t affect you right now, it will in the future, whether directly or indirectly. Everyone needs to be aware of it.” Additionally, Flikke elaborated, “We should talk about it more at school with Supreme Court cases. I don’t think a single one of my classes has mentioned it.” Abortion has tangible effects on our community and despite the controversy, the issue should be addressed more often. Whether in classroom discussions, equity labs, or other productive environments, it is essential to have conversations surrounding abortion.