Mira Sutherland ‘23 explains that for her sweet sixteen, she and her mom got matching vines of flowers on their ribs professionally done by a tattoo artist. Sutherland says she got the tattoo because, “I’ve always wanted one, I want to get more, I just thought it was pretty and my mom got the same one, and it was kind of heartwarming and nice.” Commenting on the general culture around tattoos, she shares her insights saying, “I think a lot of people get them to mean something or to represent a feeling or incident, or for looks, like an aesthetic. I think in our generation, people idolize when they’re really well-formatted on your body.”

English teacher Anil Chandiramani has several tattoos as he reflects on the reasons behind getting them and what they mean to him now. He shares, “Probably all of my tattoos I’ve gotten for aesthetic value rather than any other significance, I suppose. Most of them I just thought would look cool at a particular time in my life. Do I think they look cool now? Eh, questionable. I got them not because they have a deep, profound meaning, for reasons of art, I suppose.” Chandiramani also comments on the permanence of tattoos and how they have become a marker of his own personal growth. “I hear a lot of people who are reluctant to get tattoos say that the tattoo might not mean the same thing to them 10 years from now, and I guess in a way I kind of think of the tattoos on my body as a reminder of who I was and what I was thinking five years ago, 10 years ago, even though I see the tattoo now that is hideous… it reminds me what I was thinking and where I was a decade or two ago. It’s like a track of how I’ve evolved or grown. I guess the permanence of tattoos hasn’t really bothered me.”

Some Blake students who have tattoos opted for the stick and poke method instead of the traditional tattoo gun route. An anonymous student shares they have a stick and poke tattoo of a heart on their lower back that they got in mid-September. “I just kind of wanted one for a while, and it didn’t feel like a big deal for me. I thought a heart was always cute. My friends did it for me. It hurt a lot, but it was worth it. I like it.” They go on, stating: “I definitely would [get another tattoo]. I have like a whole Pinterest board of tattoos… I like the look of the really thin ones, so I do like stick and poke.” Continuing, they explain their thoughts surrounding possible meanings and symbolisms of tattoos: “I think it’s kind up to the person, for me I feel like it’s kind of like both [getting a tattoo with meaning and for aesthetic purposes]. I would always kind of want them to like a tiny bit of a deeper meaning but I kind of love when people get random stuff.” However, they do express that the stigma of tattoos has shifted as they have gotten older, “When you’re younger, I think tattoos are kind of taboo but less so than they used to be.”

Zoe Goodwin ‘24, another student who has two stick and poke tattoos, discusses their meaning. She has two eyes on her hand right above her thumb, and when she moves her thumb, it appears as though her hand is talking. She says, “It’s just like a reminder of how far I’ve come since [middle school].” She also has another on her stomach, with her sister’s first initial and a heart next to it. Goodwin got this tattoo as a tribute to her relationship with her sister, Goodwin states, “She means a lot to me, she’s just my best friend, she’s always been there, it’s just a reminder of who’s there.” Speaking about the experience of actually getting the tattoo done, Goodwin states, “For me, it wasn’t painful, I just have a high pain tolerance, like I’ve pierced my own ears.” 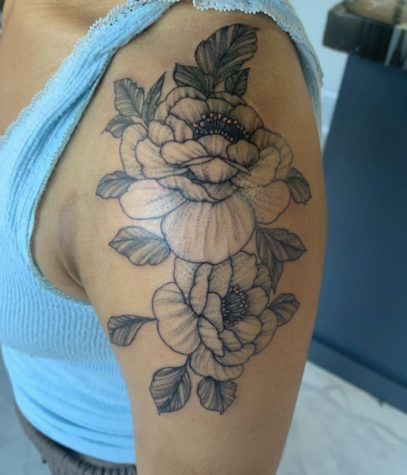 Olivia Sackor ‘24 has two tattoos, both of which are flowers, that hold a more profound meaning along with aesthetic purposes. Sackor explains these tattoos and the purpose behind them, stating: “I have two, one is on my leg and I found it on Pinterest, I got it in Vegas when we were driving back from California, and I decided ‘why not?’ [I have another] flower, and I got it in Denver when I was at a wrestling meet. It’s a memorial piece for my great-grandma, she really liked purple flowers, so I was like, ‘why not?’ It’d be kinda cool.” Reflecting on how she views her tattoos now, Sackor says, “I think I was in very different times in my life like something was happening when I got it so I could kind of look back on it and be like ‘that’s cool.’”