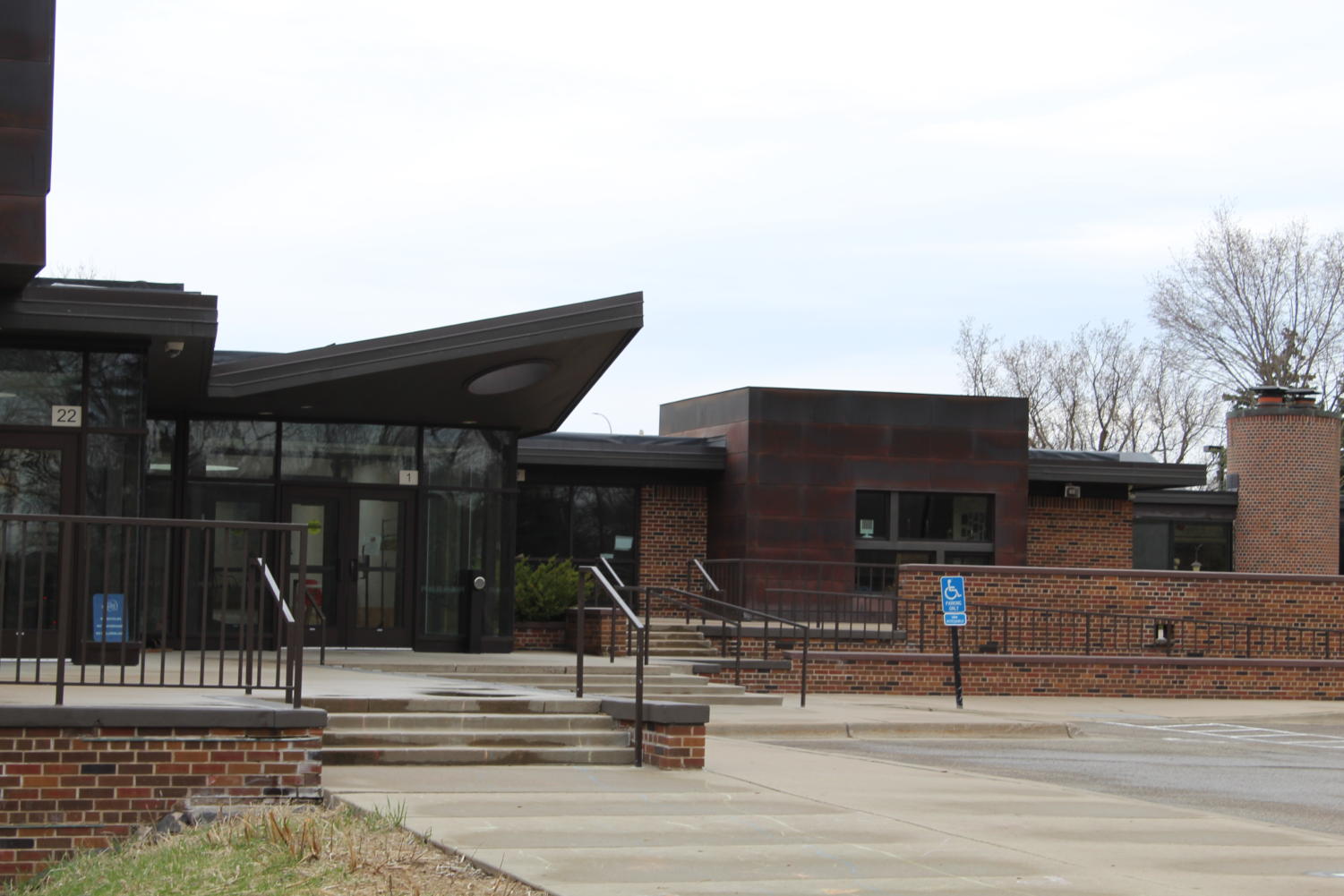 The exterior of Blake’s Highcroft Campus in Wayzata includes large glass windows and various geometric shapes. The campus is surrounded by greenery including trees, large playgrounds, and wooded areas. Outside of the pre-kindergarten classrooms in the spring, there are large sunflowers that grow, adding to the beauty of the campus. (Bernadette Whitely)

The exterior of Blake’s Highcroft Campus in Wayzata includes large glass windows and various geometric shapes. The campus is surrounded by greenery including trees, large playgrounds, and wooded areas. Outside of the pre-kindergarten classrooms in the spring, there are large sunflowers that grow, adding to the beauty of the campus.

The Lower School: A Journey Back 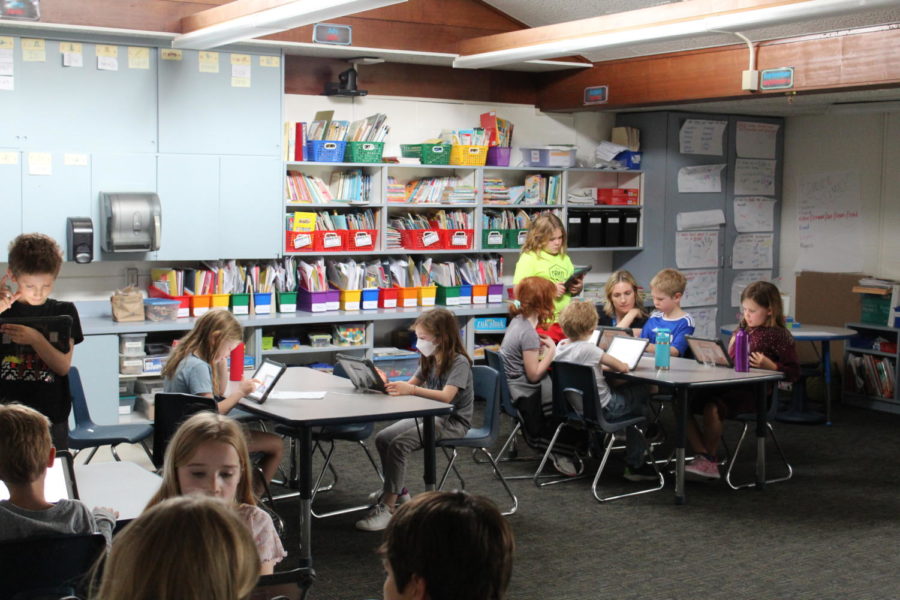 Sara Derus, second grade teacher, and Andrea Schemel, teaching assistant, instruct second graders in room number 225 at the Highcroft campus. The students work on their tablets while assistance is offered. Engaged in the work at hand, the students remain focused and concentrated.

The impending closure of the Highcroft campus and the subsequent opening of the Early Learning Center has brought a lot of attention to Blake’s lower school. The extensive list of lower school teachers retiring are among the many changes that the lower school community will face over the next few years.

For Cynthia Hechter, who has been Highcroft’s theater teacher for the past 28 years, the closure of Highcroft is sad to think about. She explains, “I am heartsick that Highcroft is closing. I think everyone who works at Highcroft is heartsick about that… I definitely understand that it makes sense for the school. I can see that this is a good opportunity for Blake as an institution.”

Similarly, many of the retirees have mixed feelings about leaving teaching and the new change it will bring to their lives. Anne VanderVorste, a Hopkins kindergarten teacher in her 31st year at Blake, explains, “Even though I’m looking forward to retiring, it’s bittersweet… I’ll miss the sense of having my space and having my class.”

David Burton, a Hopkins second grade teacher for the past 29 years, agrees. He says, “It’s amazing to watch the growth that happens in the nine months of school…I’m sure I will miss it. Right now, leaving feels really bittersweet.”

While some retirees have plans in place for the future, many are unsure how they will fill the void after stepping away from teaching. Martha Long, a Hopkins fifth grade teacher in her 24th year at Blake, says she needs to find something to occupy her new freetime, she explains, “I’m not the kind of person that can stay home and read all day. You have to have a purpose in life and that is what teaching has brought me.”

Hechter wants to continue learning through retirement, she adds, “You know how we say we prepare the students to be lifelong learners, I’m trying to encourage myself to be a lifelong learner now that I’m stepping away from the very regimented school schedule.”

A common theme amongst the retirees was a sense of gratitude for the time they have spent at Blake. Hechter describes, “It’s been a wonderful time at Blake and I will go forth into the world being a very much richer person for all of my experiences at Blake. I feel that sincerely.” Burton concurs, “It’s been a joyful career here at Blake… I can’t imagine having done anything differently. I feel so incredibly fortunate that I was able to do this gig.” 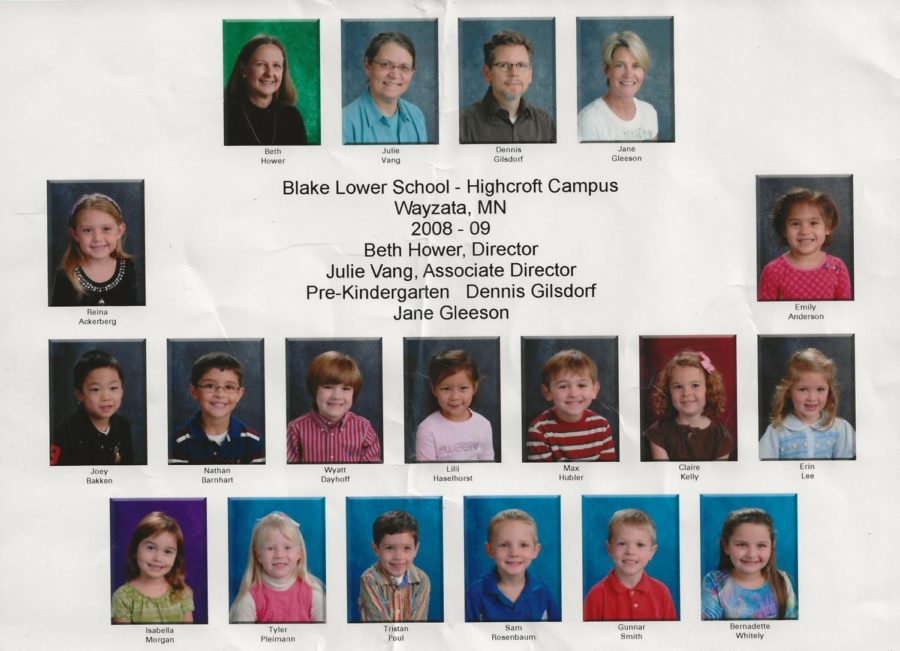 Pictured above is Dennis Gilsdorf’s and Jane Gleeson’s pre-kindergarten class of 2008-2009 from the Highcroft Campus. As current seniors come the end of their high school careers, many lifers are reflecting on their fourteen years at Blake. From young kids to college freshman, time has flown by.

As seniors end their high school careers, many reflect on their cherished memories and traditions from lower school. From the fifth grade play to Olympic Day, many students share similar sentiments surrounding their favorite times in lower school.

Annabelle Swigert ‘22 says, “My favorite lower school memory was definitely the fourth and fifth grade buddies. Having a buddy gave me a sense of responsibility and I loved playing with the younger kids.” Fourth and fifth grade buddies served as an opportunity for students of varying ages to connect and spend time with each other. Moreover, this acted as a chance to be a leader for the older students.

Another common highlight from lower school was Olympic Day. One day in the spring, kindergarten, first, and second grade students would travel to the Highcroft campus. Meanwhile, third, fourth, and fifth graders would stay at the Blake campus to participate in fun events like hurdles or the 50-meter dash. Will Rosenblum ‘22 liked this event because “it was just kind of fun to compete and it was outside and the whole school was there.” This event was an excellent time for the two campuses to connect and celebrate.

Lucio Bollettieri ‘22 reflects on his favorite memory, stating, “In the winter there would be this section of forest that kinda separated the edge of the Blake property from the parking lot and that’s where, when they would plow the parking lot, they would push all the snow there and we called it snow mountain. The faculty would let us get on and play and run around on this mound of snow.”

Continuing, Bollettieri shares how his class got imaginative, “Sometimes there would be ice on the mountain and we would shave it off and it would be money. So you would go mining for these chunks of ice and you would trade. So yeah, snow mountain was just this really long ten-foot hill.”

Bollettieri adds that another one of his favorite memories was the lower school news skits, describing, “It would be the comings and goings of lower school and there would be a bunch of skits… like announcements and everyone hyped it up so much.” He explains, “They would go to a class and interview the teacher and interview the students. It was adorable and the fifth graders would be excited because they’re making it.”

Emily Rotenberg ‘22 says her favorite memory was “doing the fifth grade play because it was funny watching everybody act because not everybody had done that before and we got to bond over it and it was just something fun that we got to do.” The fifth grade play is a capstone that both campuses participate in. The Blake campus and Highcroft campus put on different plays, but it’s a great time for the fifth graders to work together before heading off to middle school.

In the end, it is clear that lower school holds key memories for many members of the class of 2022. As graduation gets closer and the closing of the Highcroft campus is on many people’s minds, it is essential to share and reflect on these memories.